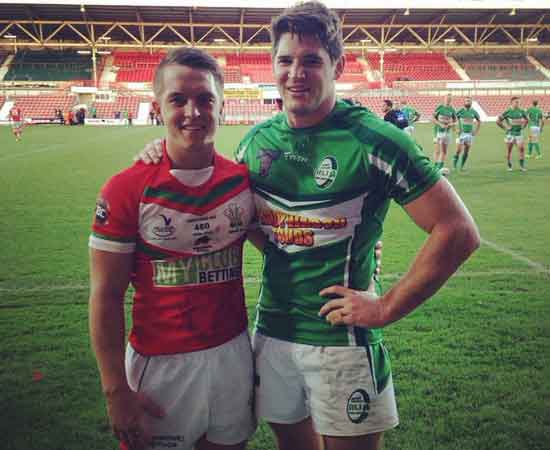 Two former house-mates are looking forward to facing up to each other when Wales take on Ireland for the European Championship crowd this Saturday in Bray (kick-off 5pm).

Bridgend-born Ollie Olds and Irish international Haydn Peacock were almost inseparable during their time at South Wales Scorpions and have been in touch ever since they both departed Wales in 2013.

But for 80 minutes on Saturday, friendship is put aside as both teams are looking to win the trophy.

For Wales the equation is simple – wins over Scotland and France mean that they have to only win or draw this final match to lift the trophy.

It’s tougher for Ireland – they need to win by 25 points more than France do over Scotland, or hope that the French fall to the Scots in Avignon earlier in the day.

Olds went to Australia and has been playing in the Queensland Cup and he’s hoping that the result will be different than the 2014 encounter when Wales lost to Ireland in Wrexham.

“I’m really looking forward to playing against Haydn,” he said. “I know that he is a very skilful player and works hard for the full 80 minutes.

“We’ll be rivals on the field, but off it, he’s like a brother to me. I shared a place with him near to Bridgend before I moved over to Australia. He’s a great person that has helped me with advice to my game.

“He knows that it’ll be all guns blazing during the match as both of us will want to win the European Championship but it will be like old times once the finals whistle goes.

“It’s going to be an exciting game bur I’ve had my first and second wins in Wales colours this autumn. I want to make it three and help bring that trophy back to Wales.”

Peacock, who plays his Rugby League in France, qualifies for Ireland through his grandparents but his passion for the green shirt is obvious to see.

“It’s hard to describe the honour and pride I have in pulling on the Irish colours and representing my family,” he said. “Hopefully continue to represent them for years to come!

“I cannot wait to face off against Ollie again. We hit it off from our very first session together at the Scorpions and his family really looked after me as a young player living overseas. We became best mates and continue to be.

“Ollie is a real competitor so it will be great to face off in what is sure to be a good game. We may have won last year but we lost the title on points difference after Wales scored late on so we were hurting from that. It’ll be tougher this year but we’ll give it our all.

“I’m currently into my third season here in France and my second with Carcassonne. I’ll remain here until May when we hopefully turn our runners up trophy from last season into a champions trophy in 2015-16.”

Tickets for Wales v Ireland are available from Ticketmaster in Ireland with discounts for advance purchases. Click here for details – http://www.ticketmaster.ie/ireland-v-wales-rugby-league-co-wicklow-11-07-2015/event/18004F429F981DC4?artistid=1633194&majorcatid=10004&minorcatid=695