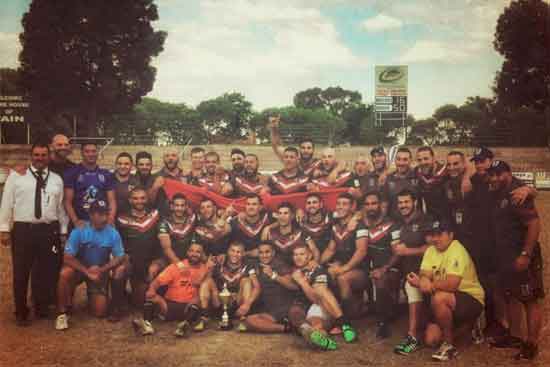 Lebanon duly qualified their first World Cup since 2000 with a comprehensive second leg win over South Africa at the Bosman Stadium, Brakpan, Pretoria.

As in the first leg, Cedars winger Travis Robinson was the destroyer in chief with a second successive hat trick against the Rhinos, second rower Elias Sukker again the man of the match after another storming display, which saw Lebanon triumph 90-28 on aggregate.

Lebanon captain Chris Saab commented: “This is the best day of my life. We have been waiting for this moment for a very long time and I hope every Lebanese person – as well as past and present players – have something to smile about.”

James Boustani, who kicked seven goals from 10 attempts added: “It’s an amazing feeling; to see what Lebanon has gone through in the last few years, to achieve this for the country is fantastic. I am proud to have played and won for my brothers, my family and my country.”

The players were joined in celebration by Lebanon Rugby League president Mohamad Habbous who said: “It still hasn’t sunk in yet, but we finally did it. This team, from the staff to the players, has been outstanding and worked so hard to achieve this World Cup qualification. I also want to thank the South African RL for being such incredible hosts and we look forward to further collaboration with them.”

Full back Daniel Abou-Sleiman opened the scoring in only the second minute, Robinson following up with two quick tries as the visitors grasped an unassailable hold on the game.

They led 28-6 at the break, their speed and organization at the play the ball constantly exploiting the South African defence along with Sukkar’s running.

Mark Daoud scored on the left after the ball was spread and, following Marcell Viljoen’s sin binning on the half hour for a grapple tackle, Sukkar claimed a deserved try.

South Africa gained some reward for their effort with try by winger Gideon Mzembe just before half time, Bradley Williams goaling.

The home response was short-lived when, four minutes in to the second period, Robinson claimed his sixth try in a week, Rupert Wells replying but the Cedars confirmed the spoils with two tries in three minutes on the hour from Tarek El Masri and the elusive Boustani, who finished with 18 points.

Nick Kassis brought up the half century for the visitors with their ninth try, Viljoen having the final say when he crossed for the ultimately out-gunned hosts.

“The boys played to the game plan, a bit of it worked, but some of it we slipped up on,” Viljoen said. “We were out on a mission but some of us were over eager, we went in too hard; they caught us out. We are working on rugby league here, it’s a sport that’s growing in RSA. The boys are keen to play. Beating BARLA was a step up for us but this wasn’t a game we were used to but we feel we are putting the sport on the map here.”