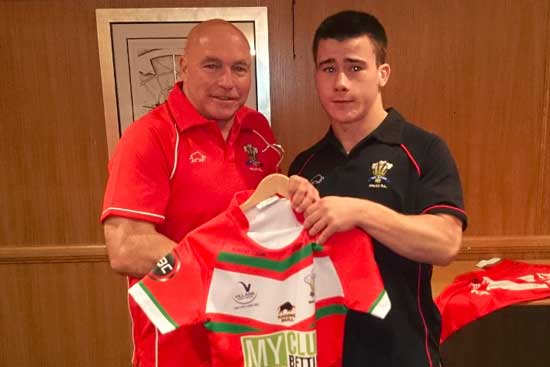 A famous former class-mate of Sam Warburton will run out onto BT Sport Cardiff Arms Park this Friday when the Welsh international Rugby League side takes on France in the European Championship at the famous stadium (kick-off 6.30pm).

Cardiff-born Elliot Kear is one of a host of players with Super League experience who will be starring on each side. Kear is an experienced cross-code player with 75 Super League appearances behind his belt after making his debut as an 19-year old for Celtic Crusaders.

He’s also won 16 Welsh RL caps, scoring 10 tries, whilst in the 15-man code, he spent half on last season playing for London Welsh, making eight appearances in the English Premiership and four in the European Challenge Cup.

That equates to over 100 appearances at the top level of rugby and his status as a top Welsh sportsman is rightfully alongside two of his famous class-mates from Whitchurch High, Sam Warburton and Gareth Bale.

Kear played at Cardiff Arms Park as recently as a year ago when on trial for Cardiff Blues but he decided to plump for London Welsh.

“I had a trial for Blue A against Ospreys,” he said “It’s a really nice pitch. I played for Cardiff Schools there in rugby union coming up through the years from aged 11 right up until I was about 16 years old and I remember going there a lot as a kid watching Cardiff.

“I love the Arms Park, it’ll be good to be back. The atmosphere there is always great. I can remember watching the likes of Iestyn Harris with the stadium being packed out and if we can get a few thousand there on Friday against France, it’ll be just as good. I think we’ll get a big crowd as there plenty of Super League players on each side.”

The 26-year old started his Rugby League at Cardiff Demons after the Blues released him as a youngster, but he has since excelled at the 13-man game, joining Bradford Bulls after the old Crusaders went under, leaving them for his brief spell back in union with London Welsh.

“I enjoyed my time at Welsh and it was a really good experience,” Kear continues. “I always had a view of trying to go back to union at some stage as I’d been out of that game for so long. I wanted try my hand at it as I’d never played senior rugby union before let alone being full-time. I met some really good people there. Justin Purnell brought me in and we got along really well, but I think League is my sport. It’s where I made my name and I’ve been full-time for seven years now. I think the game suits me more as a physical level, it’s faster and I’m a much smaller bloke.”

Kear joined London Broncos midway through the 2015 season and will start pre-season training with them soon as they aim to get back into Super League at the second time of asking.

But now, all he is focussed on is helping Wales to a European Championship victory as a win over France on Friday will almost guarantee them the title.

“I’ve looked at the French team and they look strong but then you look at our team and we’re just as strong. If we play anywhere near how we did against Scotland then it’ll be a great game and we’ll have no excuses not to get the win. We’ve a strong team this year.”

Meanwhile Pontypridd-born and based Wales international Connor Farrer is hoping that his try against Keighley Cougars on Sunday will help him obtain a place in the Wales side for the visit of France to Cardiff Arms Park this Friday (kick-off 6.30pm).

Farrer’s try cemented a good personal performance for him for Wales in the Danny Jones memorial game, and after impressing Wales coach John Kear last season with his skills and work-rate, there’s nothing that Farrer would like better than to play against France.

Wales beat Scotland 18-12 in Wrexham on October 16, a game that Farrer missed and a Welsh win over the French on Friday will almost give them the title.

“I was gutted not to have been selected against Scotland,” said Farrer. “But John Kear is a great coach and I know his reasons.

“I was really pleased to have come off the bench and score against Keighley though.

“I hope I’ve done enough to get into the Wales side for Cardiff Arms Park, but ultimately that’s John’s call. I’ll just do my best in training and accept what happens. The Arms Park is a great stadium, I’ve played there a few times before, and I know we’ll have big support, it’s going to be a fantastic night. If I do get in the side, I know that quite a few of my family and friends from Pontypridd will be down to watch.”

Whether Farrer plays or not, virtually the whole of the South Wales Scorpions club will be down to support the side and Farrer is delighted to be with the Scorpions for another season, and he hopes to be there until at least the end of 2017. The 20-year old has been in the Scorpions first team for four seasons, making 57 appearances, having made his way through the ranks of the South Wales academies starting as 14-year old.

“I’m on a two year apprenticeship in the area with work so I’m not going anywhere,” Farrer confirmed. “It was a tough season in 2015 and a lot to handle in places, but with the club under new management, everything seems to be on the rise. I’ve been really impressed with everything that’s been presented so far and it seems like Rugby League in Wales, especially at South Wales Scorpions.”