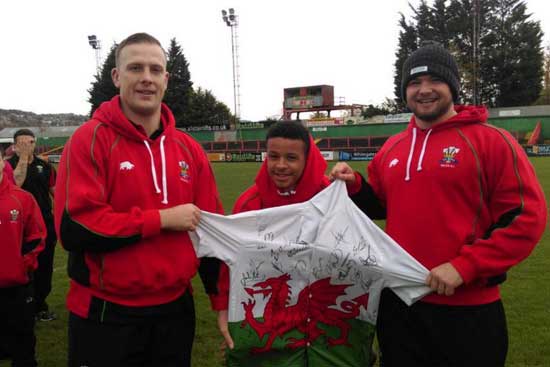 Wales fought for a 36-20 win over Keighley Cougars but the result didn’t matter, the day was all about raising money for Danny Jones’ family.

The former Wales and Keighley half-back sadly lost his life earlier this year and this event was organised as the main event of one of the biggest fundraising campaigns ever seen in Rugby League.

Over a quarter of a million pounds has already been raised for a trust fund for Danny’s twins, born just last year, and the gate of over a thousand at £15 a time for adults, will certainly ensure a substantial amount has been added.

However a nasty injury to Wales’ Matty Barron put a dampener on the match itself. Breaking his leg in two places in an accidental clash in the seventh minute ensured the game was stopped for over 20 minutes.

The injury came in the seventh minute, just three minutes after Rhys Williams had given Wales the lead with an unconverted try in the corner.

Not long after the restart and a dropped ball got Wales back on the attack. Elliot Kear fed Williams to go over in the same corner. This time Courtney Davies converted and Wales were 10-0 up.

Mike Channing slipped through a gap for Wales’ third try on 16 minutes, Davies failing to convert this time. But Cougars struck back on 22 minutes when Andy Gabriel leapt on James Feather’s grubber. Danny Lawton missed the kick to bring the score back to 14-4.

On 27 minutes, with his first touch of the ball after coming on as sub, Ricky Hough dived over from dummy half for Wales’ fourth try. Davies converted.

Five minutes before the interval and Keighley struck back again, Adam Brook with a grubber kick leapt on by Hamish Barnes. Lawton missed again.

Keighley could have had another just before the break but Scott Law’s pass to Liam Darville was forward. 20-8 to Wales at the break.

Wales were first over the line in the second half. Substitute prop Morgan Evans made a clean break and ran 20 metres to score near to the sticks.

Davies added the extras before leaping onto a loose ball from the next set after kick-off to increase the lead further, failing to convert his own try.

Wales fielded 21 players and tried a few experimental formations and Keighley also had a number of first team players missing.

But the Cougars youngsters, on a performance like this will be pushing for a first team place.

Ross Peltier barged over for a try back before Adam Brook crashes over under the sticks from close range, both were converted by Danny Lawton to put Cougars within ten points.

However Wales had the final say when Connor Farrer scored one of his trademark tries, diving over from dummy half. Ricky Hough added the conversion.

Wales are in the middle of a European Championship campaign having beaten Scotland last week and are now preparing to face France at Cardiff Arms Park this Friday (kick-off 6.30pm) and their coach John Kear says that this game was a worthwhile exercise all round.

“The players played for nothing for Danny Jones’ family and the event was a worthwhile exercise all round,” he said. “I was pleased with a lot of the individual performances there which is heartening for the future. I think I’ve had a lot of questions answered with this performance today. Definitely more answered than posers brought in.

“The very big downside was Matty Barron’s injury. He’s broken his tibia and fibula so it’s a clean break of two bones in the leg. It put a dampener on the game. Six minutes in and everyone was full of enthusiasm and I don’t think the game ever recovered from that. All the lads give them his best wishes but obviously it’s put an end to his European Championship campaign.”