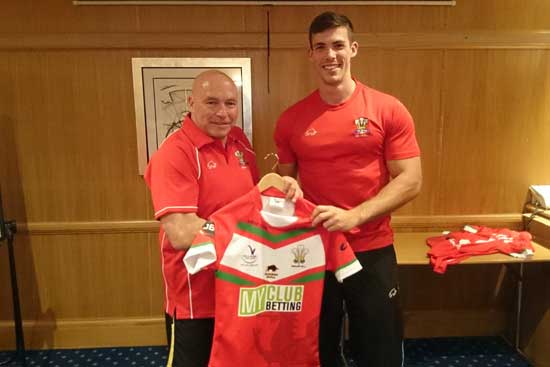 Caerphilly-born prop Morgan Evans has been called into the Wales squad to replace the injured Ben Flower.

The 23-year old, who studies at Bath University and plays professionally for Coventry Bears, made his full Wales debut last year after impressing for South Wales Scorpions and Wales Students.

Evans said: “I’m ecstatic to be called up. After a long season with many injuries and set-backs, it’s a real privilege to have the chance to represent my country again this year. I can’t wait to join the boys in camp.”

Wales coach John Kear said: “Morgan played last year for us and acquitted himself well. Since then he’s had a year of development with Coventry Bears and he, along all other Welsh qualified players, has been monitored all year. His call up is warranted and he’s always on our stand-by list. Now he’s back in the squad and deservedly so.”

Evans will join the Wales squad this Sunday as they take on Keighley Cougars at Cougar Park (kick-off 3pm) in a benefit match for the family of Danny Jones, the Wales international who sadly passed away earlier this year.

Wales then continue with their European Championship campaign on Friday 30th October when they take on France at BT Sport Cardiff Arms Park (kick-off 6.30pm). Tickets can be bought by going to http://www.walesrugbyleague.co.uk/match_day/tickets.