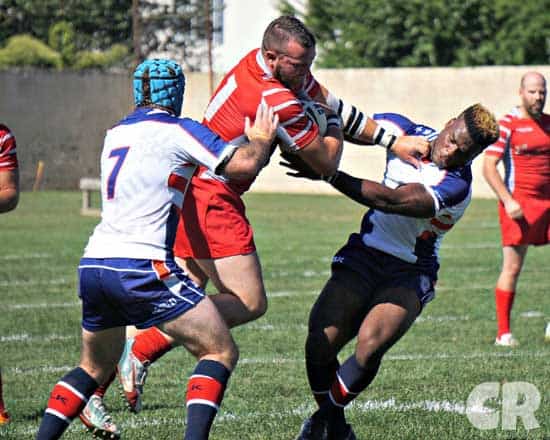 Canada has retained the Colonial Cup with another encouraging win against the United States and has set some new marks in the process.

The Wolverines posted a 34-28 victory Sunday at A.A. Garthwaite Stadium in Conshocken, PA. The result completed a 2-0 clean sweep of this year’s series for the Canadians. It was also the third straight success against their archrivals following on from their win in the one-off Colonial Cup match in 2014.

The visitors led narrowly 16-12 at the main break and then went on with it in the second half to clinch another first, their second straight series win.

“At the end of the day we played better than before, but it still wasn’t good enough,” said USA Hawks coach Peter Illfield. “It’s very disappointing.

“I was confident we’d do better, but the opposition was just a little more experienced.”

Leading up to the contest, the Americans felt they would be able to turn the tables on Canada believing that they had picked a stronger team than that which took the field in Game 1, but again injuries to key players took their toll.

Captain and halfback Matt Walsh took another knock that sidelined him, leaving the Hawks without their leading playmaker and their game plan suffered as a result.

“I think we were a little light on around the halves area and some skills sets were missing,” conceded Illfield. “They scored a number of tries down the left side where we were exposed.”

For the homeside, the try-scorers included Roman Lowery, who bagged a hat-trick, and Ryan Burroughs with a deuce. Mike Timpano added the rest of the points slotting four goals.

“I thought we had a win in us, but it was a good game of footy,” commented Illfield. “There were two good sides out there.”

Despite the loss, the Hawks coaching staff is happy with at least one aspect of the match.

“We’ve achieved a goal of being able to play a number of players in a new environment far above than what they’ve been used to,” added Coach Illfield.

“We’ll continue in a development phase as we head into the Rugby League World Cup Qualifiers.”