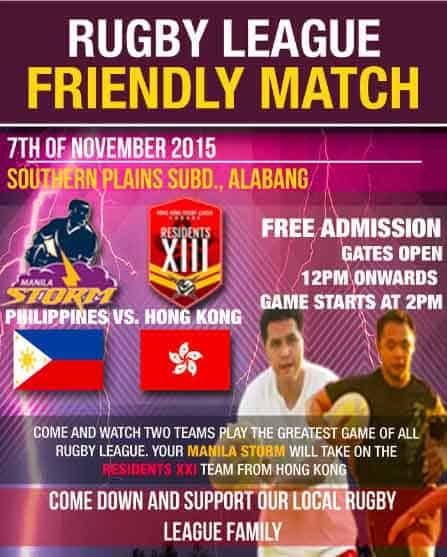 It was the 3rd of September and at 1pm in the afternoon, Tim Buipe a Papua New Guinea (PNG) national living in the Philippines with a single Rugby ball in hand (not even a League ball). Turned up at the Luneta Park Grand Stand area in Manila, having posted Facebook messages a week earlier that he was the new Philippines National Rugby League (PNRL) local Development Officer and was holding his first Rugby League tryout and training session in Manila’s, actually the Philippines most iconic National parks, because Luneta Park is also known the world over as Rizal Park, named after the Philippines National Hero!

So on that fateful afternoon over a month ago, 6 people turned up to his first Rugby League tryout and training session, 4 Filipinos who play for local Rugby Union clubs and 2 Fil-Americans who play in the local Gridiron competition. The guys must have enjoyed their first taste of “The Greatest Game of All” – Rugby League because they stayed till 5pm with Tim, as he ran them through some drills.

A week later Tim’s player numbers and resources grew, with 8 turning up to the second Rugby League tryout and training session and Tim also had 3 Rugby balls – 2 of them League Steedon’s! One generously donated by an Australian – Tim Seymour and the other by Paulo Jordan from LA LIGA Sharks Rugby Union club.

By the third training session with now 14 locals coming to training and with a full set of brand new agility cones and markers, kindly donated by Jonnie Pete Tampos, Tim could now conduct some agility and footwork drills.

Fast forwarding this to a couple of weeks ahead, from its humble beginnings, Tim has been able to assemble the Manila Storm’s “First 17”, a full Rugby League squad to play its inaugural game against a Hong Kong resident team. On November 7 at Southern Plains Alabang, with gates opening at 12noon and game scheduled to commence at 2pm.

“With the Rugby League match Between Manila Storm and the Residence XIII from Hong Kong coming up on the 7th of November 2015. The Boys are looking forward to that. Even though it will be their first Rugby League game and it’s an international club match.
The boys are ready to play with their heart and with the pride of their wonderful country, the Philippines.

In tagalong they call this ‘Ang Puso’ or with heart. They are ready to play with their heart in their home soil.”

So for local Pinoys, Expats and Fil-Foreigners from the diaspora, come along to Southern Plains Alabang, on November 7, to support a pioneering group of new Filipino Rugby League heroes as they represent the Philippines: