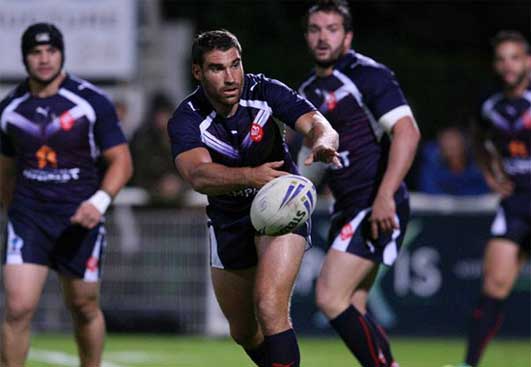 Ireland will be looking to repeat their surprise 22-12 win over France in last season’s European Championship, when the sides meet at Albi on Saturday, 17th October (kick off 15.00 CET).

The French, who will be captained for the first time by new St Helens recruit, half-back Theo Fages, have named a predominantly experienced squad as they also build to a game with England next week, a warm up match for the visit of the Kiwi tourists.

France coach Richard Agar, who has had his squad in camp in Perpignan this week noted, “We need to keep looking to improve before the next world cup in 2017.

“Although we have a number of players with Super League experience at clubs other than Catalans Dragons, there are also young players among them who will gain valuable experience.”

One of Les Tricolors possible debutants is Ugo Perez, who became the 100th player to debut for the Dragons at the end of the Super League season.

“It’s true that we have a young group but it’s created a lot of excitement and we are all keen to begin the competition,” he noted.

Ireland has named three debutants in their travelling squad, Gareth Gill is from domestic club side Ballynahinch Rabbitohs and he is joined by Bradford’s Oliver Roberts and London Broncos half-back Joe Keyes, who could come up against club mate William Barthau.

“A visit to France is always a difficult task but the players are certainly confident that they can start the series with a win,” said Wolfhounds coach Mark Aston.

“We have a squad with an emphasis on youth and these players are busting a gut to show what they’re made of on this international stage.

“We know that France will come at us with all guns blazing, but we’ll be ready for them.”