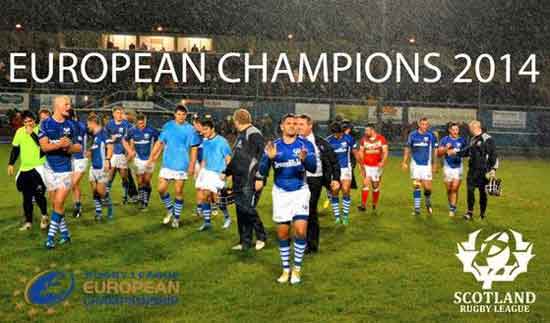 Scotland begin the defence of their European Championship crown in Wrexham tomorrow night, with head coach Steve McCormack looking to youth as the Bravehearts aim to keep hold of the first silverware they’ve won.

“We’ve had a good couple of days preparation at Thatto Heath and a run at Wrexham today so we are ready,” said McCormack. “It’s going to be a tough challenge, but I have a group of players who have stepped up and been successful for Scotland in the last couple of years and are determined to do that again.

McCormack added: “The players have bought into the importance of this tournament and the need to defend our title.

“Our backline is potentially going to be the youngest ever fielded by Scotland. Alex Walker will be involved, Oscar Thomas will be at fullback, Dave Scott has played for several years as part of this group but he’s still very young, and debutant Scott Plumridge, a three-quarter, will be in the seventeen.”

“A win on Friday night would set us up brilliantly for our return to Gala next Friday against Ireland but we appreciate how well-organised and enthusiastic any team of John Kear’s will be. I expect it will be tough and a tight game.”

There are three potential debutants in the Wales 19. Two – Jamie Murphy and Courtney Davies – currently play for Gloucestershire All Golds, whilst Morgan Knowles is from St Helens and was their U19 Player of the Year in 2015.

Wales coach John Kear said: “The two lads from Gloucestershire have really impressed me and have come in and trained like full-time players. That’s credit to their club. Morgan Knowles is a star in the making and highly regarded at St Helens so when people attend on Friday, they’ll see the exciting young player he is.”

Five other Super League players are named, including Phil Joseph, who plays for his country for the first time for eight years but, having lost original skipper Lloyd White, vice-captain Ben Flower is now also absent.

“Wigan tell us that Ben has picked up a knee injury and they don’t feel it advisable that he plays in the European Championship,” Kear noted.

“I am really pleased with the 19-man squad we’ve come up with. I’m a little disappointed for the lads that we’ve left out but the challenge for them is to support the side who have been selected.

“This selection is the result of our four days’ training together. Hopefully that will show on Friday night.

Wales include 12 players who are domestic qualified.