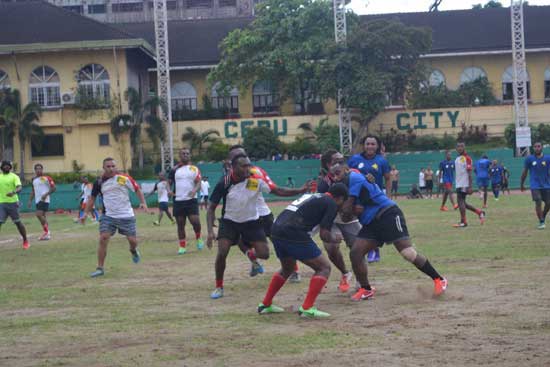 Cebu City as with Manila is a popular destination for PNG nationals taking up tertiary studies in the Philippines.

For over a decade now many PNG students and residents have been playing Rugby Union for local clubs in Cebu City, Davao City and Manila. But with Rugby League being PNG’s national sport it is not surprising that the students have now started organizing their own Rugby league tournaments amongst themselves.

Key organizers of Cebu City’s first experience of Rugby League the “Independence Cup 2015” are Civil Engineering students from the University of the Southern Philippines Foundation (USPF), 27 year old Winston Maniat whose parents hail from Sandaun Province and Enga Province and 30 year old Hilary Koban from the Autonomous Region of Bougainville.

With a little bit of sponsorship money of PHP3600 (aprox AUD100) from Paradise International Education Consultancy, an agency recruiting and supporting PNG nationals studying in Cebu; Winston and Hilary with the planning committee of, Jayjay Kerepa as the Chairman, Joraq Yanis as the treasurer, and other committee members, Joshua Kasingu, Brian Tomalia and Elizah Malmalit. Organized local PNG students from the University of San Carlos (USC), University of Southern Philippines Foundation (USPF), and the Indiana Aerospace University (IAU) to come up with additional money from their own pockets to fund and hold the first Rugby League tournament in Cebu.

Winston and Hilary stated that:

“The tournament eventuated mostly as planned and on schedule. Only three Universities participated in the tournament. Due to some reasons one of the teams pulled out at the very last week of preparations. We hope they will join us next year.

The students are keen to repeat the tournament in 2016, on PNG’s Independence Day and are appreciative of the assistance provided by Cebu City Dragons Rugby Football Club in helping organise the tournament. With special thanks going to Noel Flowers a former St Joseph’s College Hunters Hill and Philippines Rugby Union International for taking time off from his busy weekend commitments to help referee some of their games.

A number of Winston and Hilary’s Filipino Cebu City Dragons Rugby Football Club team mates were present on the day as spectators, with many indicating interest in playing their first game of Rugby League.

With plans to repeat the Independence Day Rugby League tournament in 2016 we hope to see local Filipino Cebuano’s playing “The Greatest Game of All” in the Philippines second city!