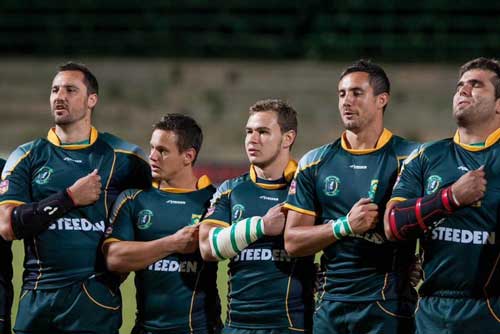 South Africa rugby league national head coach Brian Greige has begun selecting his squad for the forthcoming 2017 Rugby League World Cup Qualifiers – MEA, which will see his Rhinos face Lebanon in a two-game series, scheduled for 25th and 31st October at the Brakpan Stadium in Gauteng.

“The training squad has started the process of coming together as a larger group than previously,” Greige said. “Strength and conditioning, fitness and basic ball drills are currently the order of the day.

“Our player base comes from all the clubs throughout South Africa making our team diverse and unique with a variety of talent. This can now be tweaked into making them fine rugby league players. On the horizon we see the South African rugby league giant awakening.”

Greige took a squad to Australia recently as part of the build-up. “Gradually South African Rugby League is now moving forward with structures well in place and players learning fast and it was great to introduce new players to the game. The same can be said of our training squad and what the future holds here.”