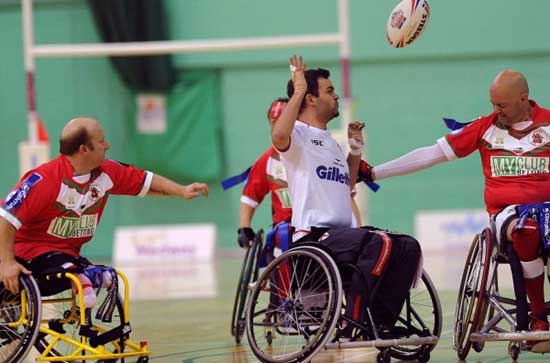 Wales are looking for glory in the Wheelchair Rugby League European Championships this week at Medway Park in Gillingham with games being played from Thursday through to Saturday.

England, France, Wales, Ireland and Scotland will battle it out to be crowned European Champions during three action-packed days of competition.

It follows Medway’s success hosting the World Cup in 2013 and the Four Nations tournament in 2014, which both attracted big crowds.

Wales take on Scotland on Thursday (5pm), on Friday 25th they have fixtures against England in the morning (11am) followed by France in the evening (7pm) and on Saturday they take on Ireland (11am). These games are then followed by a play-off on Saturday evening depending on final positions in the league table.

Wales head coach Alana Sargent said: “We have had a year of training sessions since the Four Nations in 2014 an a recent friendly international. We are well prepared and really excited to be involved in the European Championships. We can’t wait now, we want to do the best we can to qualify for the Final on Saturday evening.

“We are sincerely grateful for the extremely generous sponsorship by all our sponsors. The Infinite Group has provided £200 for each member of the squad – our players and the support team – which is the full contribution we require for our accommodation and participation fees. This is absolutely amazing. We were blown away when the offer of sponsorship was made. We have also received shirt sponsorship from Vaughan Davies Menswear of Mold and DAG Engineering. Players have also received generous sponsorship to help them play for Wales in this prestigious competition.

Go to https://www.youtube.com/watch?t=24&v=49g2hIxdRWQ to watch the official trailer for the Wheelchair Rugby League European Championships.

The RFL’s Rugby League Heritage on Tour Exhibition will on display at Medway Park throughout the championships.

The exhibition tells the story of the game, its players and supporters and, most importantly, the communities that made the sport.

As well as historic memorabilia – including a player’s shirt from the first-ever Rugby League Test and the ball from the famous 1954 Challenge Cup final replay – the exhibition tells the story of the game’s split from rugby union, the first World Cup, the banning of league in World War II France and much, more.

The exhibition will be open throughout the day on match days and admission is free. Learn more about the touring exhibition at http://www.therfl.co.uk/news/article/31178/rugby-league-heritage-on-tour