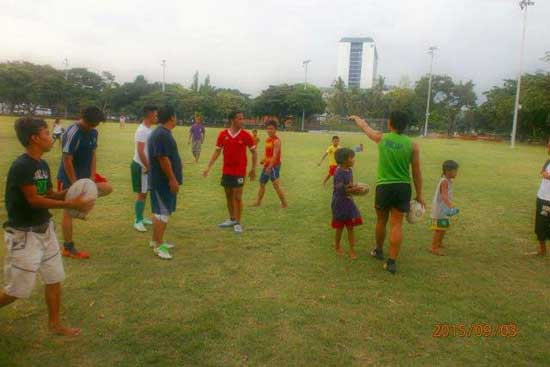 “Good afternoon all the way from Manila.

I’m Timothy Buipe 27 years of age, I have been playing Rugby League since I was in high School in Papua New Guinea (PNG). I always play Center # 3.

I came to the Philippines to study, and enrolled at Adamson University in 2013 and was studying Customs Administration. Due to a financial set back with sponsors I withdrew from studies and started a small computer shop with my Filipina girlfriend here at Pasay City.

During my stay here in the Philippines, I was introduced to Rugby Union by some of my PNG friends. I was playing Rugby Union in 2014 with the Alabang Falcons Rugby Union team.

In 2014, I also found out that there is also a Rugby league organisation called the Philippines National Rugby League. I was following them closely on their Facebook page.

At one time I was asking them if they have any Local comp here in the Philippines, which was in mid-2014. The reply I got was, that there will be a local comp that will be launched in mid-2015. I was waiting in anticipation, but then mid 2015 passed and nothing happened.

Around early August of 2015, I was sending a message to their FB page again and this time they hooked me up with Paul Sheedy.

We have been chatting over facebook for some time and he assured me that there will be an official launch of a PNRL local comp next year in 2016.

So I took the initiative to organize Some Rugby Union boys who are interested to try out Rugby League.

I organized the first Rugby League Tryout & training on the 3rd of September at Luneta Park grand Stand area. There were about 9 union boys who came by to attendant the rugby League tryout and training.

We always have Rugby League Tryout & Training every Thursday afternoon from 1pm -5pm and Sundays from 8am- 12pm at the Luneta Park grand Stand area.

Most of the boys here are happy and looking forward to play their first Rugby league game with the team coming from Hong Kong in November.”