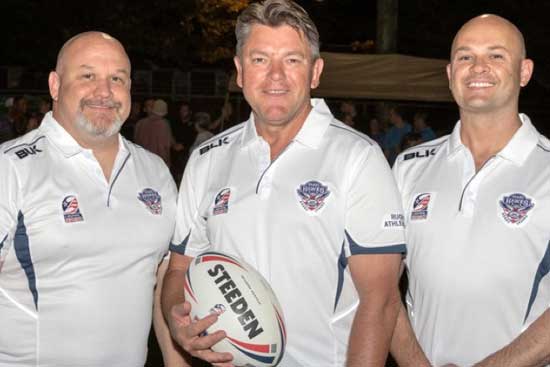 The United States is set to launch its rebranded international rugby league image later this month with the first match of a three-game Colonial Cup series against archrivals Canada.

The series opener is slated for Sunday, September 20th at one of the favorite venues for rugby league in America, AA Garthwaite Stadium at Conshohocken, PA, just outside of Philadelphia.

The USARL has named a 17-man squad for the opening game against the Wolverines with nine of the League’s 14 clubs represented.

The USA Hawks, as they are now known, are the new version of what used to be the USA Tomahawks and while they have some big boots to fill, they also have several players with Test match experience on the roster.

The Hawks will be captained by halfback Matt Walsh, one of five players who have been in and out of the national team in the last few years. The others being Kenny Britt, Andrew Kneisly, Kevin Wiggins and Casey Clark. Walsh originally hails from Australia, while the others are all homegrown talent.

“We have no expectations,” said USARL director of coaching Peter Illfield about the series. “The focus is to make sure the Hawks are well prepared for the best opposition that Canada have.”

The USA’s win-loss record against Canada is pretty good at 16-4 all-time, although the Wolverines posted a dominating 52-14 victory over the Americans in their last meeting in Toronto in the summer of 2014.

The USA, at #10 in the world, has the higher RLIF ranking of the two, but the Canadians, at #13, have been steadily improving since their international re-emergence in 2010 and there is no reason to think that they won’t be competitive again in this Colonial Cup series.

“Expect the unexpected from Canada,” commented Illfield. “My coaching philosophy is to prepare my team for what I know, that’s their skills, enthusiasm and desire to perform, not the opposition’s. We will be prepared to make adjustments during the game as required.”

This year’s series will be a three-game set with the third match being a 2017 Rugby League World Cup Qualifier for the Americas Region.

The Hawks’ squad for Games 1 and 2 will form the basis of their RLWCQ roster, which is a distinct variation from the thought processes of former national team coaching staffs who drafted in a healthy smattering of eligible players from overseas.

“Our philosophy is different than the past, it is to give those loyal to playing in our domestic comp a pathway to national success, however difficult the road may be, for us all,” added Illfield.

“Some of our first choice guys are either injured or unavailable, no different to other representative commitments in other countries. I’m confident we have selected coachable players who can raise their level of play for the occasion. The results will tell.”

The Hawks will have home field advantage throughout the series with Game 2 scheduled for October 18th at Conshohocken, PA, and Game 3/RLWCQ to be played in Jacksonville, FL, in December.

That game in the Sunshine State already shapes up as a potential crunch match with huge ramifications as not only could it be the Colonial Cup decider, but it might also determine who moves on to the RLWC depending on how each team fares against Jamaica in earlier rounds.