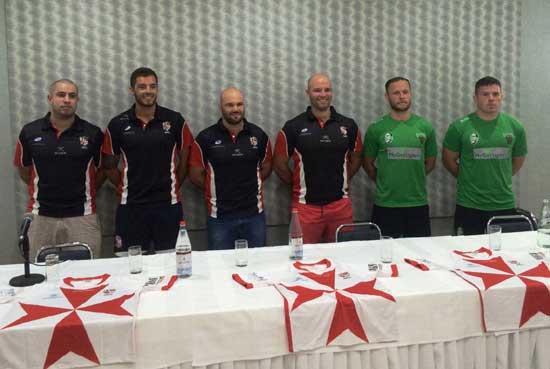 Having arrived in Malta yesterday, Ireland captain Casey Dunne said the Irish would be putting together a big performance after last week’s clash with Serbia.

“This game can’t come quick enough for the squad, last week’s events aside, this Ireland squad are looking to put a big performance together” said Dunne.

“Completion rates and errors in games this year haven’t been good enough for the quality of the team and we will be looking as a squad to up the ante against Malta”.
“I just can’t wait to get out there and smash fifty shades out of each other”

MALTA COACH EXPECTING ARM WRESTLE
Malta interim head coach Chris Parker said he is expecting a tough and physical battle against the Irish and that the Maltese will have to be at the top of their game to take the spoils.

“It will be a tough physical battle. Ireland have mixed it with Belgium and Serbia in their last two outings and came out on top of those two physical sides” said Parker.

“We have every chance of getting the win, but I expect we will need to be at the top of our game to do this. I’m expecting long periods of having to stay in the arm wrestle. Well need to keep our concentration throughout the game as I have seen the Irish punish sides when they switch off”.

With Malta’s squad coming together this week, Parker said this was an advantage the Irish had against Malta, “They’re (Ireland) well drilled. They have spent plenty of time together over the past few months and that’s a luxury most international sides don’t get. It really gives them a strong platform coming into the game”.
Malta’s last start was a fascinating 35-34 win over Belgium in June; three weeks later the Irish beat the Belgians 38-0 at home. But Europe’s third ranked rugby league nation is taking the Maltese with respect.

IRELAND CAPTAIN CALLS MALTA A BIG UNKNOWN
Dunne described the Maltese as a ‘big unknown’ but expects them to be passionate and fired up.

“This Malta squad is a big unknown which we will definitely not take lightly”, commented the Irish skipper.

“I do know they will be passionate and fired up for the game, judging on the recent performance against Belgium, as well as having a home crowd”.

Malta kick off its World Cup qualifying campaign against Spain on September 26 in Valencia before a home qualifier against Greece in October.

MRL National Development Manager Anthony Micallef commented, “We’ve been putting this squad together since the latter part of last year and it’s a good squad that’s bought into the Malta ideals and what we’re all about. It’s got experience and players of a high calibre together with new, young and fresh faces to the game that are going to be the face of our team for many more years”.

“It’s exciting times for every one of the players named, and there’s real opportunities for a number of them to make a long career in the game for themselves if they go about things in the right way, beyond our qualifying matches later this month”.