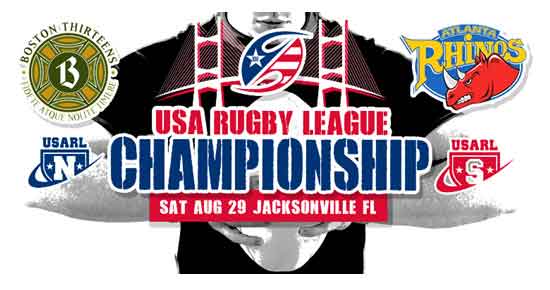 The USA Rugby League has added an All Star game to the program for Saturday’s National Championship Final V in Jacksonville, FL.

The North v South All Star game will give players from all other USARL teams not involved in the championship game a chance to vie for potential inclusion on the roster for Team USA.

In essence, it will be an opportunity for players who are not necessarily on the national team radar to make some noise and stake a claim for possible selection.

The flipside is that the match will give selectors for the USARL Hawks an additional single venue opportunity to get eyeballs on players who they may not have seen and who may not be on their national team squad as yet.

The Hawks, America’s national rugby league team, have a two-game series coming up against archrivals Canada in September and October, to be followed in December by 2017 Rugby League World Cup Americas Region Qualifiers against the Canadian Wolverines and Jamaica. That series will be played out in Florida.

The Hawks are the USARL’s new version of the USA Tomahawks, the original national team that had its roots in the American National Rugby League (AMNRL). That League, which was first established in the 1990s, came to an end at the conclusion of the 2013 season.

The then Tomahawks made it to the 2013 RLWC and got as far as the quarterfinals, where they succumbed to eventual champions Australia.

The Americans qualified for their first ever World Cup by beating Jamaica and South Africa in what was then called the Atlantic Zone qualifying series by the Rugby League International Federation (RLIF).

The Hawks are focused on replicating what their predecessors achieved.