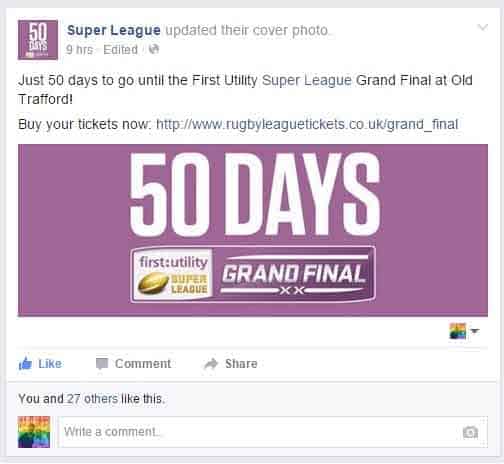 It’s game night for State of Origin 2, and replays of Josh Morris’ try become available within 3 minutes on Facebook. Six minutes later it had been ‘’liked’’ by over one thousand people, despite only being viewed by less than half this figure.

It seems people will donate their ‘’likes’’ to causes they give a crap about and scroll on without going any further.

If likes are so cheaply gifted in the NRL, why is it that the Super League can scratch up so very few?

We now jump to today, and its only 50 days to the Super League Grand Final. I know this because it popped up on my newsfeed, so I ‘’liked it’’, in addition to another 27 people. The post was 9 hours old at this stage, which in digital terms means Rigor Mortis is well set in.

Super League’s digital footprint is so shrivelled it’s alarming. At the time of writing, the Super League counted 123,000 ‘’likes’’ on Facebook (and much less on Twitter). Leeds Rhinos have almost 140,000 ‘’likes’’, well more than the League they play in, how does this work?

I know its unfair to compare the Super League to it’s Australasian cousin, but I will anyway. The NRL enjoy over a million followers on Facebook, in one weekend I observed they increased their followers by over 10 thousand. In 2014 there were 254 thousand club members in Australia, which means there were twice as many Australians willing to pull out their bank cards and contribute cash towards a club, than those in Europe or indeed the world who are willing to simply click the ‘like’ button on Super League’s Facebook page.

The complete list of Super League and NRL clubs’ Facebook followers rankings can be found at the end, but only one Super League Club (Leeds) manages to out-follow a single NRL Club (Canberra).

But how can Rugby League in Britain score over a million viewers during games on the BBC, and yet still not make any digital headway.

A YouGov survey may have the answer. Of 5,263 survey respondents who nominated ‘’Rugby League’’ as one of their interests, the majority were males aged over 60+ living in the North West of England with a background in mining and manufacturing with less than £499 in the back pocket each month. The complimenting avatar even comes with an old man in a flatcap, bless his northern soul. 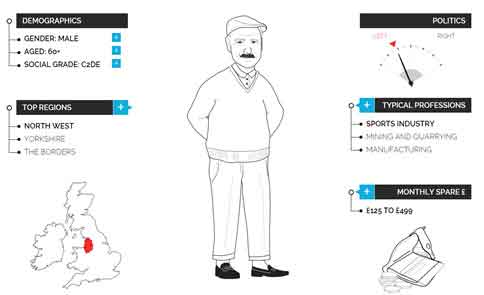 If this survey is true, it means Rugby League has had a wonderful history in Britain, but will inevitably die of old age.
Which brings us back to social media and the Super League. If Facebook is a symbol of youth and reach, then the administrators must pull up their socks.

Otherwise, there are up sides. In 1953 there was no social media, creating a healthy layer of unknowingness. Would 65,453 people have otherwise turned up to the Sydney Cricket Ground to watch an American team of amateurs get thumped by the Australian Kangaroos had they seen the highlights of their previous games on youtube?

And here are your stats as promised: