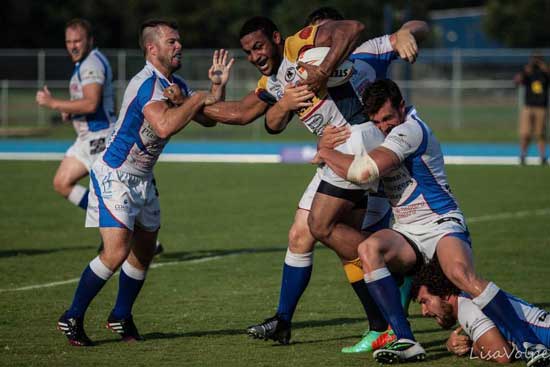 One of the youngest rugby league teams in the United States will be looking to cap off a meteoric rise when it appears in the 2015 USA Rugby League Championship Final.

The Atlanta Rhinos have qualified for their first USARL national title decider in Jacksonville, FL, on Saturday, August 29 against the Boston 13s, but what’s even more remarkable is that the club is in only its second year of existence.

The Atlanta club was established by the Southeastern Rugby League LLC in 2014 and is a partner with the Atlanta Renegades rugby union club. It is also in partnership with the Leeds Rhinos Super League team in the UK.

Head coach Bob Taylor was one of the main driving forces behind the club’s formation and is thrilled to bits to see the fledgling team into its first championship game so early in the piece.

“Edgy!” is how Taylor sums up this season. “A little unbelievable as we are without import players or coaches. If you look at some games, we absolutely stole them. We were down and out of it and then boom, some guy does the unexpected and we win.

“It’s been a fantastic season. Some of us keep a bottle of Maalox nearby to calm the nerves; you never know who will step up next.”

The Rhinos finished the regular season with a 4-2 record. There were no blowouts in their W column, they simply played consistent football.

“Well, we beat them didn’t we?” quipped Taylor when asked what got them to the postseason. “We might have been up and then down in both playoff games, but we came back and beat them.

“17 players won those games. Excitable boys at times, but damn, they just wouldn’t quit. Nothing pretty, often times ugly. Just outplay your opponent for 80 minutes, get one foot in front of the other and go after them.”

According to Taylor, Atlanta’s signature style of play could almost be described as one of unpredictability.

“Our style of play is a bit like the Nutcracker at times, or bull in a china shop at other times,” he said. “Sometimes we flow with movements and lines that look like they should and sometimes it’s just wreck whatever or whoever gets in your way, kinda like a ballerina with a bloody nose.”

As time ticks down to Championship V, Taylor says the Rhinos have done their homework on the opposition.

“We know they are from Boston in Massachusetts, home of lobsters and Samuel Adams,” he added with tongue very much in cheek. “Naw, we seen ‘em play on video. We know they are extremely talented. A tough bunch who bang around and then explode when they can. There’s a former Rhino up there we are all anxious to see again.”

Seriously though, the coach says he knows exactly what they need to do to win.

“We need to reduce our errors and penalties, play what’s in front of us,” said Taylor. “Every man do his job, be excitable and not stupid, act like we have been here before.”

As mentioned at the outset, the club is in just its second year of competition, so it can be argued that the Rhinos have had a very successful beginning to life and Coach Taylor acknowledges there are a lot of folks who deserve credit for it.

“Number 1, the Rhinos wouldn’t be around if it wasn’t for the remarkable efforts of Daryl ‘Spinner’ Howland (USARL South Administrator),” he commented. “The man is Rugby League in the Southeast and maybe in the States.

“Our sponsors are fantastic. We introduce a new sport in a major market and attract the likes of KillCliff, Sharkbite, Yuengling, YVWS, Brick House Cigars and Copa DinVino. Two of those sponsors, Sharkbite and YVWS, are Australian companies!

“They are ecstatic that we are in the Championship game. The Rhino fans in the UK, the legendary Leeds Rhinos, I mean everybody is excited. We had 100+ travel from Atlanta and various cities last weekend (South Conference Final in Jacksonville, FL). We are over the moon!”

Come Saturday night in north Florida, there will be no more time for final preparation, no more tweaking of game plans and no more wondering what it will feel like to play on a national stage for a major championship. It will be game on.

And if, at the end of the 80 minutes, the Rhinos don’t win the whole enchilada, will they still look back at the 2015 season and see it as a success? Taylor is circumspect in his answer.

“Toughest question of the bunch,” he said. “If we don’t win it Saturday night it will be a long night and Sunday will be a much longer day.

“By Tuesday the wounds will begin to heal and we will recognize we had a heckuva year with one more goal to achieve next season. That’s enough talk of a loss.”

The USARL Championship Final V is set for a 7pm EDT kickoff at Hodges Stadium at the University of North Florida. If you can’t get to the game, make sure to follow us on Twitter @RugbyLeaguePlan to catch the score and come right back here for our wrap of the big kahuna.