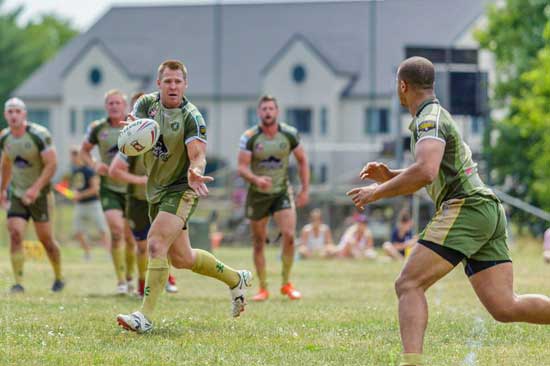 This month’s 2015 USA Rugby League national championship game will make history irrespective of who wins and that’s because a first-time champion will be crowned no matter which team emerges victorious.

The Boston 13s and Atlanta Rhinos will face off in this year’s national title match in Jacksonville, FL, on Saturday, August 29 and in this preview we look at the team from beantown.

The 13s came into being in 2009 when they joined the now defunct American National Rugby League (AMNRL). Back then, the AMNRL was in the throes of expanding rugby league from its traditional base in the Mid-Atlantic region to other parts of the country and New England, because of its nearby proximity, was seen as an obvious area to grow the game organically.

The Boston club was generally competitive in its early years, but in 2012 it really hit its straps when it went all the way to the national championship game and nearly pulled off an unheralded victory against a much more seasoned opponent. However, the 13s fell at the final hurdle, literally, to go down narrowly 28-22 to past champions the Jacksonville Axemen after looking likely winners for much of the game.

Eight players from the 2012 team, as well as head coach Robin Peers, are still on the 13s’ roster and six of them played in that title decider three years ago.

So what do they think they need to do to go one better in 2015? Coach Peers has been reflecting on that and has some firm ideas.

“Firstly we need to handle the heat,” he said. “Playing in August in Jacksonville is going to be something we haven’t experienced before and Atlanta definitely have the advantage in that regard.

“But I think we just need to do what we’ve been asking the boys to do all year. We are confident we are the fitter team and our defensive record speaks for itself.”

He’s talking about the fact that they lost just one game during the regular season, while putting a bunch of points on their opposition. Apart from the solitary loss to the Philadelphia Fight, a team they later beat in the North Conference Final, the most points they gave up in a game was 18. The flipside saw Boston rack up 50 points or more in six of their eight matches.

“I would say our season has been a solid one, but we still haven’t put in a full 80-minute performance that we are happy with,” Peers added. “Hopefully the boys have been saving that for the final for me!”

Despite not putting in the full 80 to satisfy themselves, the coach believes there is a reason his side is in the championship game.

“Our defense has been solid all year which has been a major factor, as has the buy-in from the boys,” he opined. “We’ve built this squad over a few seasons now and the competition for places in the 17 each week is tough.”

Peers likes to think Boston has a signature style of play that has been a big part of their success this year.

“Stout defense is one and offensively we can score tries from number 1-17,” he said. “We don’t have to rely on one player for a piece of magic like other teams might.”

As mentioned at the outset, the USARL will crown a brand new champion irrespective of who wins on Saturday. As for the two teams, they will spend a large chunk of time doing homework on each other, and as Peers admits, that is top of his agenda as the 13s don’t know a whole heck of a lot about their opposition.

“Obviously we don’t know too much about the Atlanta Rhinos as our teams have never met competitively, but I do know some of their boys from the USA Pioneers [Development Squad] game in January where I was the Pioneers’ assistant coach,” he commented.

“Leeds Rhinos had Terrance Williams in their camp that weekend and he has some fantastic athleticism, coupled with Nick Newlin and Daniel Gabrielli, who are big, strong boys. I also know they have an experienced leader in Salesi Tongamoa, who represented the USA Tomahawks on multiple occasions.”

Of course, only one team can win the big dance, so if the bounce of the ball doesn’t go their way and they end up on the wrong end of the final scoreline, as was the case in 2012, will the 13s still consider 2015 to have been a successful season?

“Not at all,” said Peers matter of factly. “Every year we set out to win the competition, so if we don’t manage that we haven’t met our aims or expectations.”

One thing is for sure though, the Boston 13s have set the bar as high as it goes for themselves and they are clearly set on achieving their goals.

And to get Atlanta’s take on it all, make a point of checking back here real soon as we break down the 2015 USARL championship game with the Rhinos.