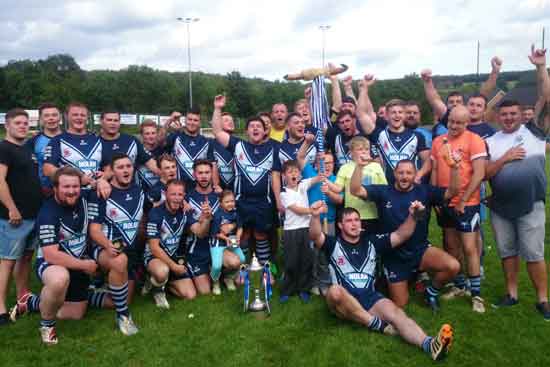 Bridgend Blue Bulls and Aber Valley Wolves fought out a stunning clash in the Welsh Grand Final for the second successive year with the Bulls taking the title thanks to a try with five minutes to go.

Last year, Bridgend won 33-30 in a battle where the lead changed hands a number of times. This year’s final was almost identical, with Bridgend improving things by a mere point.

After almost going two tries down, Aber Valley hit back when Jonny Armitage broke through the Bulls defence. Ryan Williams’ conversion gave them a 6-4 lead.

But they weren’t leading for long, Howell broke through on the left hand side and after dodging a couple of Wolves players over the try-line, touched down nearer the sticks to try and make it easier to convert his own try. However it slipped past the posts and Bridgend went into a slender 8-6 lead.

Wolves went back into the lead on 25 minutes after Darryl Skym was put over on the right and Williams kicked well to make the score 12-8.

But three minutes later, Bridgend levelled after Tom Ansen sold a dummy and ran through the gap to ground. Howells missed for a third time and the scores were level.

A good run down the right centre from Kieren Tomlin gave Bridgend the lead back. Owen Davies took over the kicking duties and landed his sides first goal to make the score 18-12 at the break.

Aber Valley levelled straight from kick-off after Lewis Willacott sprinted over half the length of the field giving Williams an easy conversion.

Josh Edge tried to put his side ahead but stumbled when put under pressure and while his Greg Inglis goanna-style attempt to score was impressive, it was rightly ruled out as a double movement.

Wolves weren’t to be denied. Jordan Gilbert went in under the sticks with Williams converting to give them a 24-18 lead.

They were defending well too. Xavier Manaseitava looked to be in for an easy try on the left flank in the final play of a good attacking set of six from Bridgend, but three Wolves players rushed over to hold him over the line.

And as soon as they regained the ball, Lewis Bowden ran down the left to extend his side’s lead. Jordan Gilbert converted to make the score 30-18.

Bridgend reduced the deficit after Dai Griggs ran down the centre and Davies converted then Ansen went over in the corner for his second of the game. Davies goaled again and it was 30-all.

The Bulls had their tails up and from the first set after kick-off, Kieren Tomlin forced his way over to score his second. Davies missed the kick.

Twice Aber Valley Wolves had tries disallowed in the last few minutes as they desperately looked to level, but Bridgend hung on for their second successive title, their eighth in the 13 year history of the competition, to complete a successful day for the Bridgend County Borough.