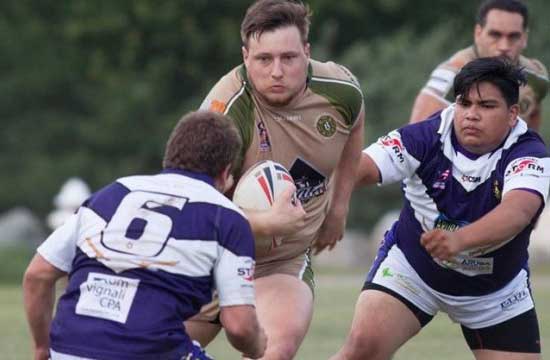 The Atlanta Rhinos and Boston 13s are through to the 2015 USARL Championship Final following victories in Saturday’s Conference Finals.

In the early game in Jacksonville, FL, the Rhinos clinched the South Conference title by outlasting a gritty Central Florida Warriors side to post a narrow 32-28 victory in a high-scoring matchup.

Atlanta got on the board first and surrendered the lead only once throughout the course of the 80 minute contest.

The Rhinos are competing in just their second season of rugby league having been established in 2014.

In the late game in Conshohocken, PA, the home town Philadelphia Fight took on the Boston 13s in the North Conference Final.

It was the second straight year that these two teams have hooked up in the Conference decider, but in a reversal of 2014, it was the beantowners who emerged victorious this time 20-12.

Apart from having home field advantage, the Fight was also a warm favorite to take home the spoils given their unbeaten run through the 2015 regular season and their early playoff round W, but the 13s had other ideas.

Boston scored first and was never headed. The 13s got into the try zone twice within the first 30 minutes and it wasn’t until the closing five minutes of the first half before the Fight finally got on the scoresheet.

Boston took a 12-6 lead into halftime, then early in the second half, a penalty goal extended the margin to eight points, before their third converted try gave the visitors a 20-6 lead inside the final quarter of the game.

The Fight lived up to their name and gave it everything they had and their efforts paid off with their second try to close the gap to 12 points. However, that was all she wrote and the 13s held on for the win.

For the Boston team, this month’s Championship game will be their second appearance in a national title match. They made it to the 2012 decider when they lost to the Jacksonville Axemen.

The USARL Championship Final is set for Saturday, August 29 in Jacksonville, FL.