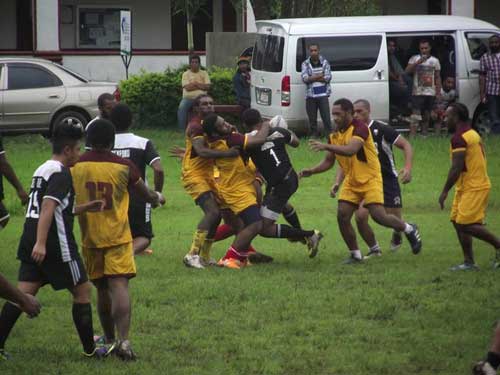 “We are looking at a long-term partnership with the Penrith Panthers and we appreciate their time and this great opportunity as they are the first NRL club that has reached out to PNGRFL,” Tsaka said.

“We have been in discussions for over 12 months and over the weekend we hope to firm up things and sign an MOU to get this relationship to a stage where we can benefit from Penrith Panthers expertise in a wide range of areas, not just in football but administration among others.”

Tsaka said that this is an opportunity that PNGRFL wanted to maximise as much as possible which will “give us a template that we can use to foster similar relationships with other NRL clubs, who might be interested”.

Gould or Gus as he is known is very popular to Papua New Guineans because of his work as a Channel 9 commentator, and former coach of the New South Wales Origin side, but now holds the position of Executive General Manager for Penrith Panthers.

Tsaka said PNGRFL was very privileged to have this visit by such a high powered delegation and have planned a series of activities such as a Meet-N-Greet do with many of their stakeholders including sponsors, and the SP Hunters and fans who purchase grandstand tickets following the Hunters versus Wynnum Manly game.

The Sunday event will be at the Crystal Lounge at Cosmopolitan at Vision City.

“It is not a huge place so whoever observes the dress standards as required by this club and most importantly gets there first before it is full will be allowed entry if they show the appropriate grandstand tickets.”

Tickets for the game go on sale starting on Friday at Stop-N-Shop outlets in Port Moresby with K50 for grandstand, K25 for outerstands. No tickets will be sold at the gates.