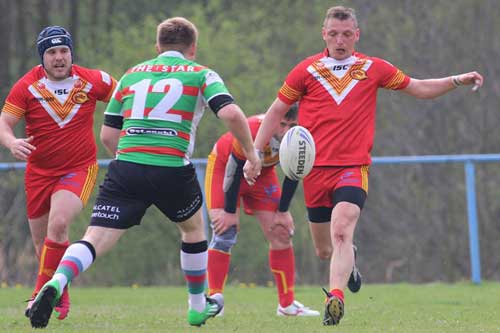 A 19-man tour group representing English Colleges has arrived in the Czech Republic to play two games against the Czech U20s in Vrchlabí.

The first match is tonight (Friday, 18:00 kick-off) with the second on Sunday (14.00 kick off) after which there will be an official, commemorative dinner.

The tour celebrates a landmark for the CZRLA as they celebrate their 10th birthday and national coach Antonin Berk noted the significance.

“This is an important year for us,” he said on the tourist’s arrival. “We have established a junior competition which is very important for the development of rugby league in Czech Republic. We played our first U20 international in 2012 and lost 70-0 to BARLA Youth from the UK – for many players that was their first real taste of the sport – but last season beat Latvia U20’s twice, which is a measure of our progress.

“We know these games will be a really tough challenge but it is what we need.”

Coach James Massara said, “We have worked hard to prepare as a squad, the players have set themselves high standards. I am sure that the tour will be a successful and we will achieve the objectives we have set as a group.”