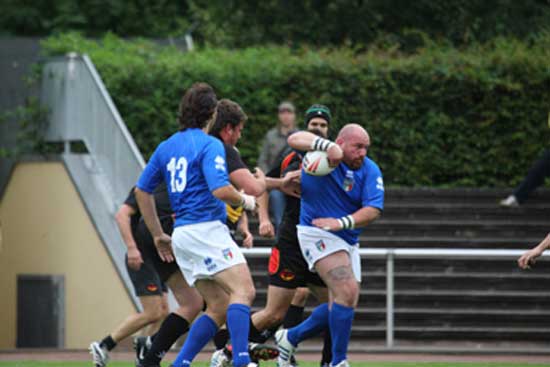 An early, six-minute, genuine hat trick from Lions Brescia winger Nicola Bellotti and a second half shut out of the hosts, ensured that Italy will take their place in the 2016 European Qualifiers for the following year’s World Cup, after a 40-12 win in Ukraine.

The Azzurri also moved above Russia on points difference and into second place in the European Championship B table, leaving themselves with an outside chance of taking the title come the final round of matches.

“I’m proud of the guys,” said Broadbent. “Our ball retention improved from the last two games, we didn’t lose our concentration and everyone worked so hard for each other.

“Achieving the Qualifiers is another stepping stone but we shouldn’t get carried away. There is a lot of work to do before we get there, especially continuing our domestic development and becoming full members of the RLIF.

“We are ticking the right boxes and this is another step, there are lots of positives and we’d like to keep the momentum going of our World Cup experiences,” he added.

In a match with plenty of ball movement and played in a good spirit throughout, the Italian right hand side was unstoppable in the opening exchanges, Emanuele Passera on each occasion serving Bellotti for his treble.

Oldham full back Richard Lepori created the first and a terrific run from Decaro the second, but each conversion from wide out by Pierangelo Ceretti was missed.

Twelve points behind in as many minutes, Ukraine clawed their way back level four minutes before the break, hard working Legion XIII, Kharkiv pair Mykhailo Troyan crashing over between the posts and prop Volodomyr Karpenko powering across; Oleksandr Skorbach converting both.

Just before the break, Italy struck down their left this time, Octavian Ilinca on the end of expansive passing to cross for a fourth unconverted try.

Six minutes into the second period, Italy’s Simone Boscolo forced his way over, Chris De Mayer’s first goal establishing a ten point lead, although he missed a penalty soon after.

Ukraine lacked genuine pace to finish off the openings they created and the Italian defence read the play well to scramble in cover as the hosts began to run out of energy in the hot conditions.

Lepori raced on to a kick into the in goal to claim the visitor’s eighth try, De Mayer with his fourth goal as the final whistle went.

Ukraine coach Gennady Vepryk commented, “I was generally satisfied with how we played in the first half but we will have to look at what went wrong in the second.

“This is the first time we have played in a competition at this level and we will be the better for it. It is tough to take that we are no longer involved on the road to the World Cup.”