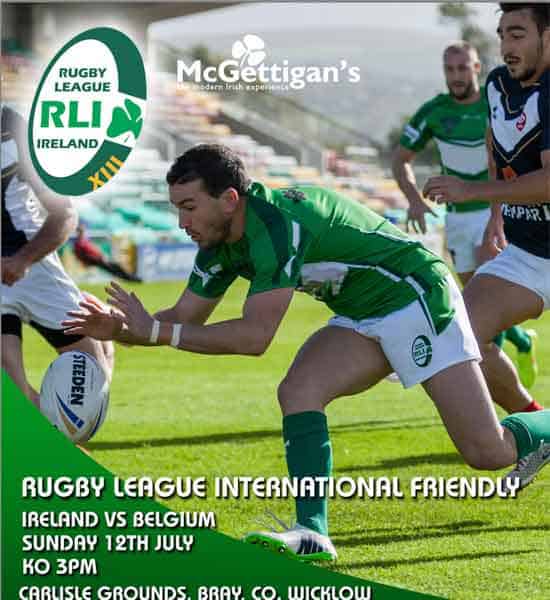 The Carlisle Grounds in Bray, Co. Wicklow, the oldest football grounds in Ireland, is now the official home to Rugby League Ireland. All international and representative games, as well as the All Ireland final, will be held at the historic ground.

“We believe that our move to Bray will do nothing but strengthen Rugby League in Ireland”, commented Richard Egan, Director of RLI.

“We really hope to become part of the community in Bray, and with our title sponsors McGettigans, and The Royal Hotel, Bray both being local businesses who are both backing us, we believe that this can become a reality.”

Bray will get their first taste of international senior rugby league on Sunday July 12th, when Ireland will take on Belgium for the first time on the international stage. The Irish team is coached by current Ireland students coach and Bray local Carl de Chenu.

“It’s very exciting to bring international rugby league to the Carlisle grounds in my home town, Bray and to be involved as the head coach is a real honour. We’ll be hoping to celebrate the start of a great partnership with a win on July 12th against Belgium and show our potential new fans the great game of rugby league.”

RLI believes that the addition of rugby league to Bray can only strengthen local businesses – a point proven during the recent university 4 nations – between Ireland, England, Scotland, and Wales – which was held in the Carlisle ground and saw over 1000 hotel bed nights in Bray. A great time was had by all parties, which saw England defend their 4 nations title.

Tickets for the game will be available shortly on Ticketmaster and will cost €5. Kids u16, Students, and OAPs go free.