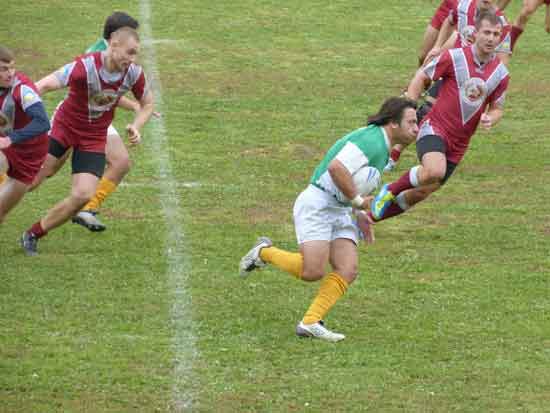 Despite narrowly losing out in the Artur Martyrosyan Memorial Cup, defeated 32-24 by the visiting English Lionhearts at the Spartak stadium in Kiev, Ukraine RL have hailed the contest as being immensely valuable.

The match served as important preparation for the country’s looming international season, with Ukraine traveling to Belgrade next month to play against Russia on neutral territory, the first of three crucial European Championship B matches.

Ukraine currently sit bottom of the table after three away defeats in 2014, their first year at this level of competition. Victory against Russia would breathe life into their campaign and set up two home matches, against Italy on 18 July and Serbia on 12 September; the top three sides aiming for the 2016 European Qualifiers for the World Cup the following year.

“This event was very important for us,” said UFRL president Artur Martyrosyan Jr. “The high-level experience is vital for our players. We were also happy that English fans were able to watch the match live-streamed for the first time. “

The game was attended by the ambassadors of both England and Australia, and Lionhearts tour manager Dave Raybould commented, “We have to thank our hosts for all their hard work over the last few months to pull the tour together.

“The match was fiercely competitive and all the players, coaches and staff had a really worthwhile time.”

The Lionhearts raced into a 12 -0 lead, Rob Kirk and winger Dan Suddaby crossing from distance, Will Milner adding both conversions.

The Ukrainians responded when Mike Tkoyan broke and crossed out wide, Alexandre Scorbach with the goal.

Lionhearts scored two further tries through West Hull players Ben Arbon and Ash Shaw, Milner kicking both goals but again the hosts hit back, the strong-running Tkoyan crossing for his second try and Scorbach again with the extras to make the half time score 24-12 to the tourists.

The Lionhearts posted two scores early in the second half, Nathan Hargreaves finished a great move and Dave Douthwaite powered over from close range, both unconverted.

The visitors started to tire in the 30 degree heat and Ukraine scored two late tries from Shelayev Nikolay and Kardakov Pavel.

Scorbach kicked a conversion and a last minute penalty.