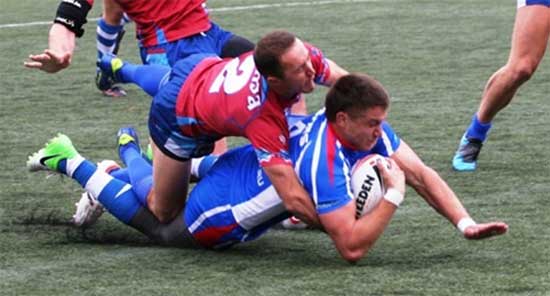 The Rugby League European Championship B fixture between Ukraine and Russia will go-ahead, despite the on-going political situation between the two countries.

The clash, between the teams in second and fourth place in the competition – and with 2017 Rugby League World Cup European qualifying competition berths up for grabs, will be staged on neutral territory at the Makis Stadium, Belgrade on 4 July (6pm kick off) as part of the RLEF Congress there.

Ukraine RL federation president Artur Martyrosyan commented, “Ukrainians and Russians are brotherly, friendly people. What is happening between the leadership of the nations defies explanation.

“We all hope that the situation will improve soon and that we will once more be able to play rugby league against each other in our own countries.

“In the meantime, we wish to extend our thanks to our Serbian friends who have stepped in as hosts. Let us hope that this show of unity between our three federations will be a worthy example for others.”

Martyrosyan added, “Sport has always united, and when a sport as hard as rugby league serves to bring people together, the message is all that stronger.”

Radoslav Novaković, Serbian RLF Board member and Belgrade Rugby League Federation chairman added, “If anyone knows what it means to be denied to represent your country because of politics, we in Serbia do.

“We wanted to help our friends and if the world looks at Ukraine versus Russia as something more than the game, we can show that rugby league is more than the sport.

“It is great to hear that a rugby league match between Ukraine and Russia is taking place. Sport is one of the few areas over which politicians of all backgrounds come together.

“Rugby league has a long and proud tradition of binding communities and nations together and there is no better way to continue that legacy than through this forthcoming match.”