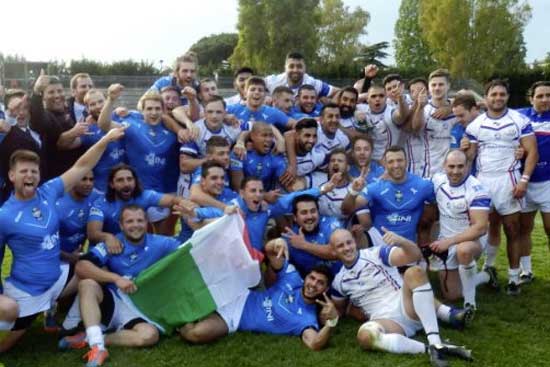 So. what exactly is going on with rugby league in Italy? Why the division and what lessons can be learnt for the future of the game, both in Italy and in other nations that are in a development phase?

For some of the answers, you’d be well advised to talk to Pierluigi Gentile, head of the breakaway Lega Italiana Rugby Football League and, by his own admission ‘a rugby league revolutionary’ who wants to spread the game as widely as possible across Italy.

Pierluigi is a successful Rome-based businessman who represented Italy at rugby union sevens and played the fifteen-a-side code professionally in Australia, Scotland and in his native land.

After retiring from playing, he became a firm convert to the thirteen-a-side code and subsequently began an association with the existing FIRL governing body, an association that was to end acrimoniously in 2009.

He was given the task of spreading RL in central and southern Italy and, within a couple of months, had created two clubs in Rome and Catania that added to the burgeoning growth of the game at the time across his country.

“I was surprised to be given such responsibility from the start but I soon recognized that there were serious problems with how the game was being governed.

“It culminated in the phenomenal performances and results of the Italian team in the 2013 World Cup. The team was almost entirely comprised of NRL players who had little or no experience of Italy as a nation and could not speak the language.

“Their official launch took place in Sydney and they didn’t even stop off in Italy en route to the tournament.

“Sure, they might have had Italian ancestry but the results received no coverage in the Italian media and their participation came despite being assured that the best home grown players, that I had played a part in nurturing, would form the majority of the squad.

“For a sport to grow here, the Italian people have to feel a connection to the athletes representing them. There was no connection,” added Pierluigi.

The azurri tinted dye was cast. His mission to revamp and refocus the FIRL had fallen on deaf ears and his desire for change was invigorated.

“In Italy, as in many nations, we have thousands of rugby players who just want to participate in the sport for twelve months a year. They are not aware of the cultural split that has existed since 1895. They just want to get an oval ball in their hands and run with it.

“The FIRL faced another major obstacle. The FIR, the governing body for Italian rugby union, was recognized by the influential Italian Olympic Committee (CONI) as the only overarching organization with responsibility for ‘rugby’.

“For a sport to be taken seriously here, it requires CONI accreditation and recognition. It unlocks funding streams and leads to a much higher media profile but the sports in question must demonstrate that they are democratic, truly national and have a clear plan for growth in participation.

“None of these factors could be applied to the FIRL and despite many attempts by myself to build bridges and reunify the sport through meetings involving the international governing body, it was clear that we were on a very different path.

“Whilst we are part of the FIR, we are independent with our own management structure, fundraising and marketing activities. The FIR plays no part in rugby league in Italy other than providing a pool of over 77,000 rugby players from 3000 plus clubs keen to improve their skills and play this great sport as often as possible.

“The Lega Italiana Rugby Football League, aptly named the Revolution League, is growing fast with more and more clubs opting to come under our umbrella while the FIRL appears to have stood completely still.

“We have a clear vision and plans to develop rugby league at junior and youth level. We are player focused, referee focused and coach focused as well as being able to generate sponsorship and a growing media profile.

“We don’t care how long it takes to get an Italian team into the Rugby League World Cup but, when we do, we want it to be a proper Italy team developed from the talent within our borders,” added Pierluigi.

Over the past four years, the Lega Italiana RFL has attempted to arrange fixtures with Spain and Poland, however their efforts were rebuffed due to suspected pressure exerted by the game’s international body.

In late 2014 Ikram Butt’s BARA (British Asian Rugby Association) team was invited to take on the Italian “rebels” in one of their first competitive fixtures.

Last March, Pierluigi’s renegades travelled to Kenya last March and won34-24 in front of over 7,000 spectators. Part of that trip involved the players helping out at orphanages. Corporate social responsibility (CSR) activity forms a vital part of Pierluigi’s plans for the future whilst Ikram’s charges are no strangers to pioneering contests, having faced and beaten Spain last year in that nation’s first ever, official match.

BARA took on Italy in Rome on Saturday 16th May, competing for the White Ribbon Trophy with the Italians winning 20-18 with a last minute penalty in what was an absorbing contest.

The White Ribbon Campaign is a global movement to end violence against women and children by men.

Ikram commented: “I believe in social progress on every level and have always believed that sport is a perfect medium in which to achieve it. It encourages teamwork and builds bridges and, in time, I hope that this visit to Rome will be seen in this way.

“It is why BARA and Pierluigi’s organization is fully behind the White Ribbon Campaign.

“Much of my work since retiring from playing has, unashamedly, crossed both codes and involved both codes and the RFL and RFU working together to get rugby balls into the hands of children and adults for the first time.

“I was open to the idea of taking on Italy from the start. They are not burdened by the baggage of history or cultural nuance. They are just about giving rugby league the most solid foundation it could wish for,” added Ikram who was accompanied on the trip by the legend that is Garry Schofield OBE.

The former Leeds and Great Britain stand off, voted in 1990 as the best player in the world, commented: “We have to do what is right to develop and grow the great sport of rugby league. Sometimes nations will develop in a way that doesn’t fit in with our existing way of thinking but we have to have empathy with, and understanding of their own culture and sporting governance.

“This is the case in Italy and I wish Pierluigi and his team the very best of luck for the future. They are undoubtedly building something here that will only do good for the game of rugby league, regardless of how it flies in the face of tradition,” added ‘Schoey’.

As for the future Pierluigi is clear: “We want the two governing bodies to unite in the best interests of Italian rugby league but that must be done with both democracy and growth at the forefront of our thinking.

“People accuse me of being a rebel. They are right. Only by challenging the existing order can we bring about change and this applies to rugby league as much as anything else.

“What is happening in Italy could be a template for other countries. It will not fit the existing rugby league superpowers but, if we are to move the game forward we need to recapture a bit of the spirit that led to the formation of the game all those years ago,” he concluded.

It seems that Italian rugby league, empowered by the energy of Pierluigi and his colleagues, could well be providing a template for the future, whatever people may think of the past.

Maybe, just maybe, we should recognise that in some nations, such as Italy, officially recognised rugby union governing bodies, through independent subsidiaries such as Pierluigi’s federation, can deliver and develop domestic rugby league better than existing RL organisations.

It’s all about biting the bullet and accepting that the other codes’ management structures, playing resources, marketing and media profile could well give rugby league the growth it deserves in nations like Italy.

It’s also about accepting that time and again, rugby league’s governing bodies have made serious errors of judgement based on the creation of a pretence rather than the construction of genuine sustainable structures and shown a distinct lack of marketing nous outside of these shores.

This is clearly not a bulwark by the Italian rugby union intended to strike a dagger to the heart of rugby league as a sport but a genuine engagement, by interested parties, with ‘the greatest game’ to develop year round rugby activity.

Hard perhaps for the traditionalist to take but undoubtedly revolutionary.at least in Italy!