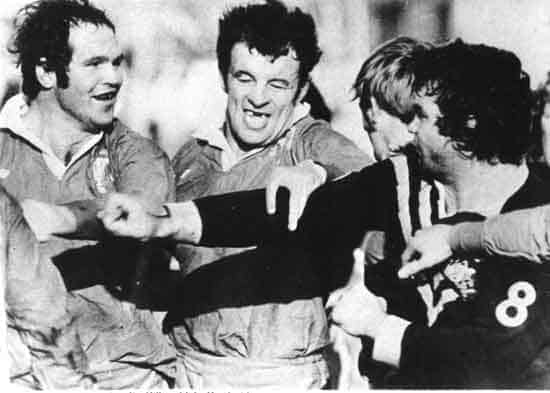 Players from the infamous “Battle of Brisbane” where Wales beat England 12-7 in the 1975 Rugby League World Championship in a win that helped to deny England the trophy, will reunite 40 years on, almost to the day.

A landmark lunch to mark the 40th anniversary of the 1975 World Championship is to be staged at the Cedar Court Hotel, Bradford, on Saturday June 13 and will be attended by surviving members of the England and Wales squad who took part in the seventh and longest World Cup-style tournament.

The event is being held as part of the Rugby Football League’s 120th anniversary celebrations and is being staged in aid of the RFL Benevolent Fund. It will include a three-course lunch, a parade of the England and Wales squads, interviews and competitions.

Also in attendance will be Rugby League ex-players’ associations, making the event an afternoon of nostalgia.

The 1975 World Championship made history with Great Britain being split into England and Wales for the first time, joining Australia, New Zealand and France playing each other home and away on both sides of the world for a total of eight fixtures each.

The tournament kicked off on March 2 and finished on November 6, the title being decided on league placings. Australia topped the table, one point ahead of England with Wales taking third place.

Wales’s 20-man Australasian squad was coached by Les Pearce and skippered by David Watkins and featured Kel Costlett, Tony Fisher, Bill Francis, John Mantle, Roy Mathias, Jim Mills and Mike Nicholas. A further eight players took part in the autumn matches in Europe, a section of the tournament that saw Wales beat New Zealand 25-24 in Swansea, the last time that the Welsh have won in this encounter in either rugby code.

The infamous England v Wales match took place on June 10 at Lang Park. David Treasure and the late Clive Sullivan scored tries for Wales that day with David Watkins kicking three goals. Tommy Martyn replied for England with their only try with Scottish born George Fairbairn, who now works for the RFL as a match commissioner, kicking two goals.

Five years before State of Origin started, this “Battle of Brisbane” was a British precursor to the type of matches that Lang Park, now known as Suncorp Stadium, would see over the years and in his biography, “Big Jim”, former Wales international Jim Mills remembers the game well.

Mills said: “It was one of those games, playing against team-mates and friends for your country. Alex Murphy had been on television the night before and when asked about the Welsh team, he said that none of them are good enough to get into the England team. That set the match up when he said that, everyone was a bit bitter.

“It was a violent game and Mick Morgan, the England hooker, was knocked unconscious and was carried off on three occasions. There were a lot of bust ups, it was a hard fought game and the Aussie enjoyed it. They were playing us the following weekend but we didn’t get a chance to recover and were still tired. If we hadn’t beaten England, they would have won the World Championship.”

The British Lions – players and management who have represented Great Britain, England or Wales on tours Down Under – are an integral part of the new Rugby League Cares Reunions programme.
We look forward to the Rugby League family joining the illustrious contingent of British Lions, fellow Internationals and past servants of club Rugby League.

Tickets are priced £35 (cheques payable to Rugby League Cares) with the bar open from 11.00am and lunch served at 1.00pm. To book any size of party, please contact Katie Irwin, Operations Manager of Rugby League Cares at Katharine.Irwin@rlcares.org.uk or call 07540 636515.