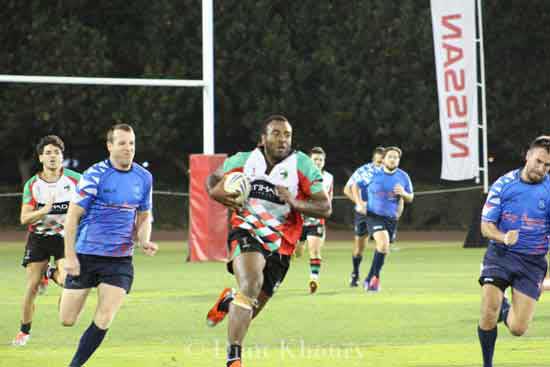 The RLEF held its second Board Meeting of the year on Monday, attended by Rugby League International Federation chairman Nigel Wood and, for the first time, newly appointed RLIF CEO David Collier, OBE.

The Directors discussed a series of topics including the 2014 membership audit, the 2017 Rugby League World Cup qualifiers and various governance items.

“The RLEF Directors were delighted to welcome David Collier to attend our Board Meeting,” said RLEF chairman Maurice Watkins. “He, alongside Nigel Wood, contributed fully to the high number of important topics we are involved with, notably the RLIF application to join SportAccord and recent events in the UAE. The Board also received an update on the progress being made by the Serbian Rugby League Federation, surrounding the organisation of July’s Congress in Belgrade and I look forward to greeting our member delegations there on 4 July.”

Concerning UAE, Sol Mokdad, president of the Rugby League Commission in the UAE, which is an Observer of the RLEF, was imprisoned last Wednesday following a charge filed by the Emirati rugby union federation. The RLIF appointed legal representation and is corresponding with the authorities in the UAE.

David Collier said: “Having recently attended the Asia Pacific meeting, I was very pleased to attend the RLEF Board Meeting. The Northern Hemisphere has seen a rapid increase in the number of countries taking up rugby league over the last few years and as we shape the future of the RLIF it was very helpful to discuss the issues facing the federation’s diverse membership.

“We were able to debate important issues including the future schedule and governance in both a regional and international context which provided valuable input into the future priorities for RLIF.”