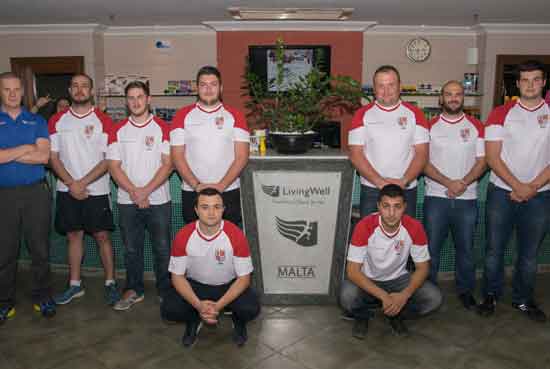 Malta coach Anthony Micallef has heralded another development move with the launch of the national squad at LivingWell Health Club.

Dual Malta rugby international Malcolm Attard said the national squad concept has been bought into by local players both young and experienced.

“There’s a lot of energy in the younger guys, and this part-time approach takes it up a level from what everyone is used to. We work full-time jobs, but having a structured approach for a select group of players puts everyone on the same page and gives everyone a lot more direction” said Attard.

The squad, with an average age of 25, includes a focus on bridging the gap in playing and fitness standards between local and foreign based players, a concentrated youth involvement, and the squad includes four players under the age of 22 that all play in the MRL Championship.

MICALLEF LOOKS AT AUSTRALIA AND UK BASED TALENT
Malta has eligible players playing in the two highest competitions in the world; Australia’s NRL and England’s Super League. Players including the Wakefield Wildcats’ Jarrod Sammut are regulars in the Malta team.

The national team’s 34-16 loss in Sydney against Lebanon last week unearthed some new players eligible from the Australian leagues that Micallef is keeping a close eye on.

“There were a number of solid performances in Sydney. I’m working closely with our manager in Sydney, David Axisa, to get four or five of them over to Malta this year” said Micallef.

MALTA BASED PLAYERS PREPARING FOR BELGIUM TEST
Birkirkara 19-year-old winger Jean-Pierre Zarb debuted against Greece last year and was in the Malta team that defeated Czech Republic 34-8 away from home.

Zarb commented, “Everyone is looking forward to the June match against Belgium. We’re expecting the biggest crowd we’ve ever played in front of, and the players from Malta are trying to be in the best condition we’ve ever been in for a summer international. The overseas based players are always at a strong level and we want to be closer to that level”.

ITS IMPORTANT LOCAL BUSINESS SUPPORTS MALTESE SPORT
LivingWell Health Club Manager Paul Sparling said the partnership with the MRL was a continuation of a relationship held since the team’s European Bowl victory over Norway in 2010.

“Its important local business supports Maltese sport; the players involved give up a lot for the honour of wearing a national shirt. Here at LivingWell we can offer an excellent training environment but also somewhere to come to relax and recover which is just as important when the guys are holding down full time jobs and training” said Sparling.

LivingWell Health Club is a temperature-controlled environment and is located within Hilton Malta. The facilities include steam, spa and sauna, squash courts, rowing facilities and all gym facilities are within the confines of the Portomaso complex.

HIGH PERFORMANCE COACH TO BE APPOINTED AHEAD OF IRELAND CLASH
Malta national coach Anthony Micallef said ideas were taken from pro clubs and setups abroad including Jamaica’s well documented Hurricanes Rugby League project. The national squad concept will benefit in the coming months from the appointment of a high performance assistant coach.

The Maltese national rugby league team is currently ranked 24 in the world and face 21st ranked Belgium on June 21 at Carnegie Headingley Stadium in Leeds.

In August, Malta host the 7th-in-the-world ranked Ireland as its final warm-up before the World Cup Qualifying campaign kicks off on September 26 in Valencia against Spain.