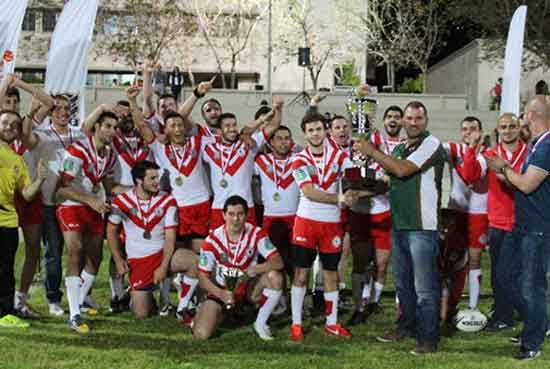 The American University of Beirut (AUB) defeated the University of Balamand (UOB) 20-4 in the Lebanese national collegiate Grand Final, played in front of around 200 fans in Balamand, north Lebanon. The victory ended a 12-year drought for one of Lebanese rugby league’s founding institutions.

AUB head coach Mikhael Shammas, a player in the 2003 side, said, “I am truly humbled by the opportunity to give back to my alma mater and even more so by the commitment all of our current generation of AUB student-athletes.”

Man of the match and opening try scorer, AUB hooker Alfred Bowles added, “After 13-years, we have finally broken the curse! It was an honour playing alongside my teammates, which I happily call my brothers, and I’m just so happy I was able to contribute to a win that we have all been working long and hard for.”

UOB Coach Darwich El Darwich noted, “It was a great game but it’s a bit tough losing two consecutive Grand Finals. However, all credit to AUB who defended well for the whole game.”

AUB led 4-0 at the break, skipper Mickael Marchi Mekari doubling it in the 53rd minute before Tarek Fayçal and a Cyril Nasr conversion gave them a 14-point advantage.

Balamand struck back on 65 minutes through powerful centre Ali Bou Arabi, who was later sin-binned as frustration got the better of him, Bowles put the finishing touches to a fine display, scoring his second try late on.