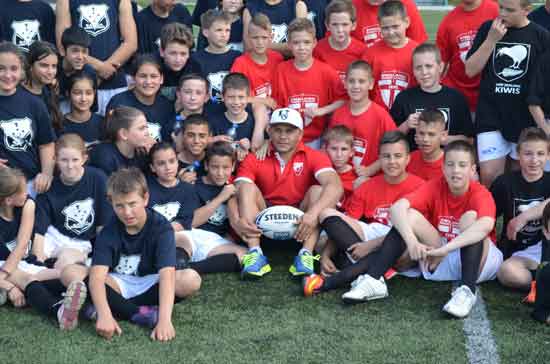 Wigan Warriors and former Australia full back Matt Bowen made a huge impression in rugby league circles in Serbia, having spent the weekend in Belgrade as a guest of the Australian Embassy there.

Bowen was on hand on ANZAC centenary weekend to lend his support to a children’s rugby league festival in the capital, as well as appearing on television shows helping to showcase the sport in the country.

“It was a great honour to be there and be able to help promote rugby league,” Bowen said. “The game is obviously spreading all over the world and I enjoyed a chance to come here and help it grow.”

Over 200 Serbian children got to meet one of their heroes in the flesh as part of a pilot project administered by the Serbian Rugby League Federation (SRLF) and Australian Embassy in Serbia to teach schoolchildren in Belgrade the basics of the sport.

SRLF president Predrag Pantic noted, “It was wonderful to have Matt here to witness what we are doing. Through the programme we are offering a chance for both boys and girls aged 10 to 14 to see what rugby league is and, if they are interested, they can practice it for free during the school year.

“With the help of Australian Embassy we are able to cover elementary schools all over the Belgrade but with the accent on poor suburban areas where kids don’t have much of chance for sport. Hopefully some of them will become full time players one day.”

Pantic added, “Just having such a star player willing to come across Europe to hang out with them is really a big thing.”

“Australia is a flagship rugby league nation and we are happy that we can help our friends get involved in this great game,” said Australian Ambassador in Serbia, Julia Feeney.

“The ANZAC remembrance is an extremely important date for our country but also we remember that others made big sacrifices too, Serbs particularly. We are happy to get involved in this programme and will continue supporting the SRLF in the future .”

The aim of the Serbian Federation now, this visit also coinciding with the 61st anniversary of the first rugby league match staged in the country, is to qualify for the 2017 World Cup in the Antipodes, and they have another fan who will follow their quest.

“They even tried to sign me up,” joked Bowen. “I really hope they can succeed, it’s going to be tough, but I saw great enthusiasm. Certainly playing in the World Cup would be a huge achievement for Serbia and I’ll be rooting for them all the way.”