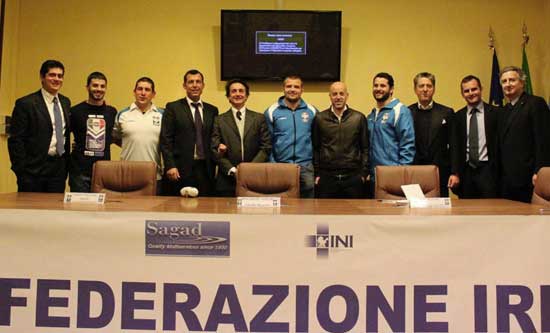 After many years of words, the doubts are finally gone. The world of international rugby league calling for clarity on FIRL (federation that was in the RLWC 2013) and FIRFL (federation with the largest number of participants and most present on the Italian territory), has been satisfied.

The Firfl, in fact, since last April 15 has officially become Lega IRFL Irfl and was recognized by the Italian Rugby Federation (FIR) and then by CONI (English: Italian National Olympic Committee), along the same lines as rugby sevens (7 a-side) and beach rugby, under the support of the FIR, officially conducts rugby activity, defined as he code (game) of rugby league (Rugby a XIII).

This has historical and statistical implications: the Lega IRFL is the first rugby league movement recognised in Italy in history, the first rugby league federation in partnership with a major rugby union federation (the Fir, in fact), and the second of the world’s rugby league recognized by IOC (Norge Rugby League is under Norge Rugby Bond, while South Africa Rugby League is going through the same process as Lega IRFL with SARU and SASOC).

This will have important operational aspects, regarding the possibility for clubs and rugby union players (77k in Italy), to be able to play in the in the newly formed championship ‘Lega’ (and finally in the only official Italian national rugby league body in the country) with full insurance coverage and with the approval of the FIR. The insurance coverage of the players will be the same given to the clubs and players in rugby union. It is inevitable that this will be a driving force for a movement that, compared to other recognized specialties, will help at least on some technical and tactical aspects rugby union, as is already being done in the most major rugby union bodies.

“We are really proud and happy for this recognition – said the Lega IRFL General Secretary Pierluigi Gentile – especially because for years we were given false information about us from other pseudo reality. It’s funny now to think that we were called “rebels” for years and now instead, finally, a kind of justice has stated that the “rebels” are the others. Over five years ago we took our way for two important reasons: because we always thought fundamental right and relate in a serene and constructive dialogue with the Fir from which we come and we thank them, and then because we are Italians and , in our view , it was right that the our National was the expression of a movement created in the territory.

Six years ago we took our way for two important reasons: because we have always thought fundamentally and to relate calmly and constructively with the Fir, from which we all come and given thanks to them and then because we are Italians and, in our opinion, it was right that our national team was the expression of a movement created in the territory. It is too simple to call players only for a world cup (and qualifiers), when there are guys for years who play, sweat and struggle in your championships.

As long as I do, we will never leave them out. I have nothing against the heritage player, rather they are a help, but we need these same players in the first place to play in our championship, that actually help to improve the level and, in doing so, will certainly be part of our national teams. The hope now – says Gentile – is that the European institutions do not block our development, as was the case until recently, using the pretext that we were not recognized. We are now recognized and we hope, as already happened in London, at Westminster (the movement thanks to the Member of Parliament, Greg Mulholland MP), of being welcomed and listened to. We want the national teams or foreign clubs that can finally as many times there has been requested, to confront us, to allow us to improve and grow again.”

An inevitable thanks, at this point of the growth of Italian Rugby League: “A special thanks goes to all the Fir and in particular, the attorney Nino Sacca and President Alfredo Gavazzi who have ferried, following the directions given to us by the CONI president Malagò. I would like to thank all those who contributed to our movement from the beginning, and even those who have supported us over the years, but unfortunately some have chosen other roads. I hope that finally, who manages the few clubs in the other pseudo association, does not prevent their guys to play in a championship that is finally recognized. Now players can stay calmly, under a legal profile and insurance, to play the game of rugby league in Ital . I invite them – concludes Gentile – to act in the interest of their players and rugby league and we will welcome them with open arms.”