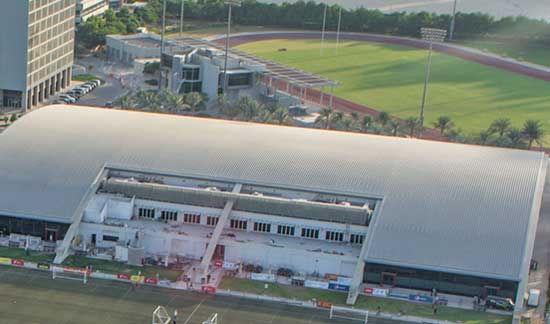 Dubai Sports City, which is hosting games in the new UAERL Nissan Cup, will also be the venue for a 2017 World Cup qualifier later this year.

The winner-takes-all Middle East & Africa Test between South Africa and Lebanon will be played there on Friday 30th October and will decide who becomes the eighth nation to qualify for the competition which will be held in Australia and New Zealand in two years’ time.

“It is an exciting global sport and will sit well alongside the other major sports that are already played across our venues.

“We believe the presence of rugby league at Dubai Sports City will attract even more people to our Sports Village to take advantage of our world-class facilities and we look forward to the sport going from strength to strength here.”

MEA Director Remond Safi commented; “Everyone is very excited about the prospect of bringing a first full international to Dubai and it’s great that the first ever Middle East/Africa World Cup berth will be decided in one of the region’s most established event hubs.

“There are a lot of opportunities for rugby league in the UAE and the region and I am sure that this will be the first step in a long and fruitful relationship.”

Lebanon RL Federation president Mohamed Habbous noted, “Over the last three years the LRLF has had to fight an uphill battle to maintain all its activities.

“However, with the upcoming World Cup qualifier versus South Africa, we have a chance to take the sport to another level.

“Being on the world stage allows us re-engage with sponsors, fans, and government to firmly position Lebanese rugby league as a staple sport in the country and positive force.”

His counterpart at South Africa RL, Kobus Botha added, “South Africa is excited about this opportunity to participate in rugby league’s showcase event.

“We have been hard at work preparing and appointed a dedicated coaching team last year who selected a national training squad, and that team has been together for a period of time now.

“They have played several matches against provincial sides and, in the lead up to the World Cup qualifier, they will also play some international matches to prepare us for facing the traditionally tough Lebanese.”

Further World Cup qualification information will be announced by the RLIF over the next few days.