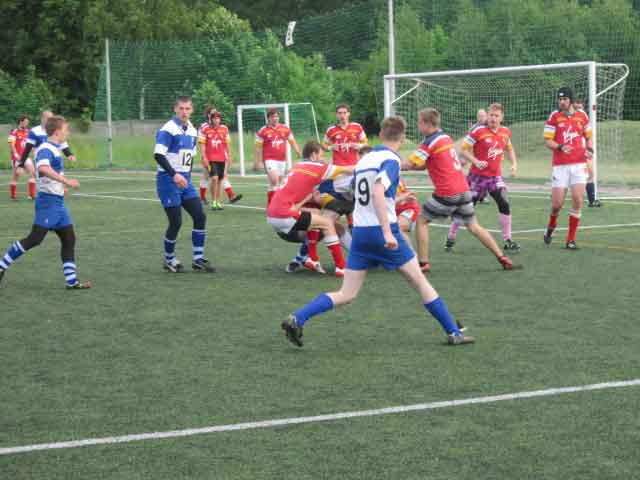 The RLEF’s Czech Republic Development Manager, Andy Mulhall, is returning to his native Queensland, leaving behind him a vibrant and expanding rugby league scene.

A teacher in the Czech Republic, in 2006 Mulhall read in a rugby league magazine that local enthusiasts were starting the sport. An offer to help out with coaching led to his unbroken and extensive involvement in developing the sport, both on and off the field.

“There is no doubt that Andy’s tenacity has massively contributed to the development of rugby league in the Czech Republic,” said CZRLA director Iain Sellers. “Although a team effort, Andy has singlehandedly contributed to our growth more than any other individual. His passion for the game is evident to anyone who spends any amount of time with him.

“He displays a single-minded determination and has been involved as a player, coach, administrator, referee, mentor, sponsor and, most importantly, a motivator in his time involved with us. He has laid down roots for the sport in central Europe.”

Mulhall instigated the formation of Czech clubs and a national championship, which has grown steadily since 2009 when three teams participated. By 2012 two divisions were playing with a total of nine clubs and last year 12 senior and seven junior clubs made up the CZRLA’s domestic programme.

He has also passionately championed the advancement of local leaders, with Czechs now holding senior technical positions and six of seven directorships on the Board. One of those, national team coach and RLEF Level 1 Coach Educator David Lahr, is a beneficiary of the Mulhall effect.

“CZRLA is growing because Andy believed in it,” said Lahr. “In 2010, it almost disappeared but Andy’s passion for rugby league here saw CZRLA re-built from scratch. Andy was my first coach back in 2008 in Pardubice.

“He taught me almost everything I know about rugby league, he invested his time and his own money. He played with us, he coached us, he also – sometimes – got drunk with us! Our job now is to keep it progressing.“

RLEF General Manager Danny Kazandjian paid tribute to Mulhall’s work. “There are countless unheralded people currently involved in European rugby league development. Andy’s contribution to the RLEF story, though, deserves to be brought to the public’s attention,” he commented.

“The countless hours and effort he put into developing the CZRLA are a result of his total commitment and dedication to Czech rugby league and his love for the sport. On behalf of the RLEF I wish him all the best in the future.”

Mulhall said on his departure, “It has been a great honour to play a role in introducing rugby league to the Czech Republic, and an immense pleasure to see the sport gradually taking hold here in local communities, to the extent that it is now firmly established at a legitimate grassroots level and will continue to flourish.

“I thank all the many people who I have had the pleasure of working with in the process, both in the Czech Republic and from the international RL community, and pay particular tribute to the founding father and inaugural Life Member of CZRLA, Milan Mrtynek, and to John Anderson, Jan Sluka, Iain Sellers, Michal Priputen and Gerard Keenan, who all played such pivotal roles in establishing the CZRLA.

“I step down in full confidence that the CZRLA will continue to prosper and grow under the leadership of a group of dedicated, passionate supporters led so adeptly by Petr Sedina and Pavel Kubasta, and I wish everyone involved continued success at all levels of development.”