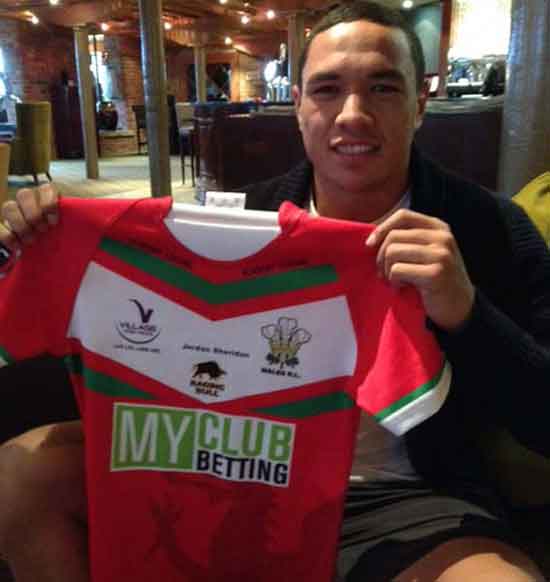 St George Illawarra Dragons star Tyson Frizell has committed to Wales for the 2015 end of season international matches and beyond as Wales, coached by John Kear, look to qualify for Rugby League World Cup 2017.

Frizell scored the first try for the NRL Dragons on Friday night as the Australian side claimed a controversial 18-12 win over Warrington Wolves at The Halliwell Jones Stadium to give Australia a 1-0 lead over England in the World Club Series.

The 23-year old was taken off with concussion during the game so was unable to give further comment after his side’s win, but he made a statement earlier in the week following a meeting with Wales Rugby League’s team manager Bob Wilson.

Frizell made his Wales debut in 2011 and has now won six caps. Now a regular with his domestic Dragons side, the second row forward is excited about his international future after missing last year’s European Championships.

He said: “I’m looking forward to coming back into the Wales camp following the NRL season and I’m determined to help Wales reach the 2017 World Cup.

“I’ve spoken to Bob and John as well as some of the Wales players and management from 2014 and they’ve told me about the fantastic team spirit that existed during last year’s camp. It certainly looks like that Wales Rugby League are going places and I can’t wait to add to my caps total.”

A former Australian schoolboy rugby union international, Frizell has a Welsh father and a Tongan mother. He will be one of Wales’ highest profile players on the road to Rugby League World Cup 2017 in Australia.

Wilson said: “Both John and I are delighted with Tyson’s commitment to help Wales reach the Rugby League World Cup 2017. Tyson was very enthusiastic for the future of Welsh Rugby League and he can’t wait to get going in the autumn.”