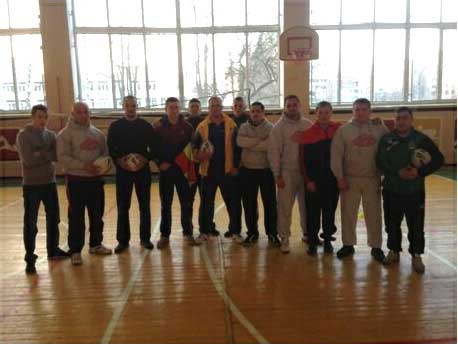 Today in Ternopil held regular UFRL MO’s courses. Traditionally in February of each year, before the season started national and international competitions Federation conducts such activities to improve the skills of their staff. At this time, in a welcoming s.o.shkole №19 gathered 11 participants from six cities of Ukraine: Ternopil, Lviv, Rivne, Uzhgorod, Khmelnytsky and Kharkiv.

The course consisted of five parts: video review of competitive activity Rugby League, the theoretical foundations of the MO’s Training Level 1, situational tasks and practical exercises. The course concluded with a viewing of the NRL Grand Final match.

At the end of the course, all participants received certificates of Rugby League.

UFRL is grateful for assistance in the course of judicial management in Ternopil RK “Teren” represented by Dmitry Pidgrushnogo and Vladimir Krutovsky and Director School №19 Hanna Yarema.

The Ukraine Rugby League have put forward a draft calendar of the Ukrainian Championship of Rugby League “League I” for 2015.

8 teams will be divided geographically into two groups (“A” and “B”), played by a group Etap two rounds (home / away). Then the two strongest teams reaching the final of the competition and play “A2” – “B1”, “B2” – “A1”, and then play the losers and winners of each. The composition of the groups: “A” – “Sokil” Lviv, “Korzo” Uzhgorod, “Rivne” Rivne, “Roland” Ivano-Frankivsk; “B” – “Legion XIII – ShVSM” Kharkov “Kryvbas” Krivoy Rog, “Atlant” Dnipropetrovsk, “CEPU” Simferopol.

The competition is planned to start in March.