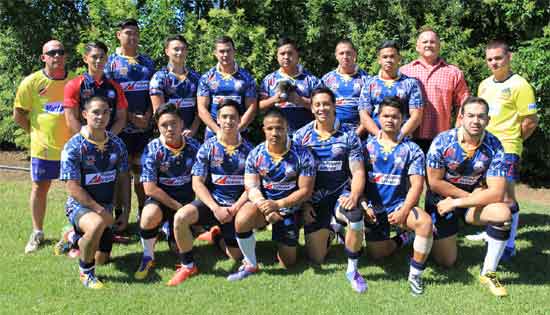 Teams 3 and 4 reached the quarter finals and Teams 1 and 2 the Semifinals.

So the PAL Tamaraws were eager to send Clayton off on a high note.

The fairy tale of our inaugural entry into this tournament in 2012 was looking like repeating itself at this tournament with the PAL Tamaraws coming away with an opening loss to Blacktown Workers 22-10 followed by an 18-18 all draw against the Cook Islands and a resounding win over Portugal 24-8. So the same one win, draw and loss in the pool rounds of our inaugural appearance in 2012!

A tough encounter awaited the PAL Tamaraws in the Plate Quarter final against a Fijian side here to prepare for the South Pacific Games. With both teams scoring 3 tries each with PAL Tamaraw Tom Gunn, who flew down from Darwin to play in this tournament scoring the crucial last try for the Philippines with the final score of 16-14!

The PAL Tamaraws were again to face another Pacific Island nation in American Samoa. Who had flown in many of their players from New Zealand, to prepare them at this tournament, for the South Pacific Games.

Nothing separated the two teams in the 1st half trading 2 tries each with the Philippines unfortunately letting in a try on the whistle in the first half. The American Samoans scored first in the second half. But with 2 minutes to go Tom Gunn broke through the defence and scored a runaway try for the PAL Tamaraws adjacent to the post. Marc Russell had the opportunity to put the PAL Tamaraws in front, but just missed the conversion, locking the scores at 16-16.
The PAL Tamaraws dug deep with the American Samoans having the ball from the kick off, but the Philippines forced an error giving them the ball. The Philippines worked hard to get into a scoring position but with one tackle left and 13seconds to go on the clock a speculative pass was thrown which was intercepted by American Samoa ending a repeat of the 2012 Fairy Tale!

Even though disappointed not to come away with any silverware at this tournament; a Facebook message sent to Mark De Ubago, the coach of the Philippines 2 team from one of his players summed up the reason why so many Filipino-Australians/New Zealanders passionately get involved with the PAL Tamaraws:

Will Simpson: “It was an honour representing my motherland today at the Cabra 9s tournament. Hardest game(s) of footy I’ve played, was a very good experience thanks Mark and the Philippines National Rugby League for the effort put in managing 4 teams in this comp playing at two separate parks. — feeling honored at St Marys Rugby League Club.”