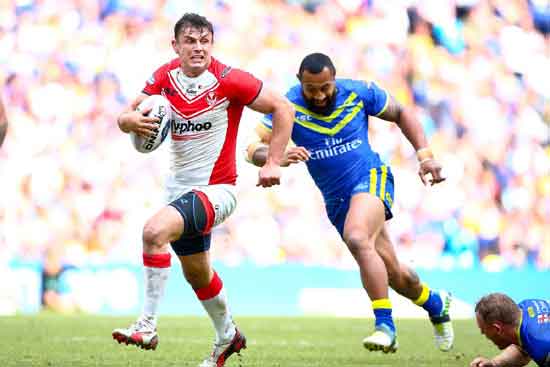 Jon Wilkin believes St Helens’ 2015 World Club Challenge showdown with South Sydney Rabbitohs on Sunday February 22 (7.00pm) is the perfect opportunity for the First Utility Super League champions to show their credentials as the best team in the world.

Having beaten Wigan Warriors at Old Trafford back in October, the match is Saints’ chance to be crowned world champions and the club’s newly-appointed captain says his team-mates team are relishing the challenge.

“We are worthy champions and it’s high time we got the credit we deserve,” said Wilkin. “Some people have said ‘Well, Wigan were down to 12 men’ and that we limped our way into the final so this game is our moment to demonstrate what we’re all about,” said Wilkin.

“We are very confident in the squad we have, there have been a notable difference in attitude amongst the players since our Grand Final win. The confidence is immense, to back it up with a win against the Rabbitohs would give us further crucial experience in our development.

“Our game is going to be huge, particularly with the whole Burgess story at South Sydney: I can’t wait to get stuck into them. The prospect of challenging ourselves against the best players in the NRL is fantastic. The NRL is a great competition and we can learn a lot from it but Super League also has some great attributes and we need to put them on show.”

Wilkin missed out on the Grand Final due to injury but, having already played in a World Club Challenge back in 2007, he is hungry to get back out on the field.

The former England international wants all English Rugby League fans to get behind the new World Club Series and show their support for all the teams involved – Wigan Warriors host Brisbane Broncos on Saturday February 21, 24 hours after Warrington Wolves take on St George-Illawarra Dragons at The Halliwell Jones Stadium.

“I was injured towards the end of last year and my focus since then, through all my rehabilitation, has been kicking off to South Sydney. Being involved in that game has been the fuel, it’s motivated me,” said Wilkin. “The excitement has been huge, I’m revved up for this game.

“The key word is intensity. When we played Brisbane back in 2007, what stood out to me was the intensity level, it was beyond anything I had ever experienced before and I expect the same again. It’s a huge start to the new era, it’s exciting and a great way to get the momentum started for the new season.

“I know that it will be difficult to get a seat at Langtree Park. Packed terraces and passionate support of the English game will be a visible sign to people who don’t usually watch our sport that it is exciting, it will get people interested. I want to come out of the tunnel and not see an empty seat.”

Tickets for the 2015 World Club Challenge between St Helens and South Sydney Rabbitohs at Langtree Park on Sunday February 22 cost from £22 for adults, £15 for concessions and £10 for children. Tickets can be purchased from the Langtree Park ticket office or by calling 01744 455 052. For full details please visit www.saintssuperstore.co.uk