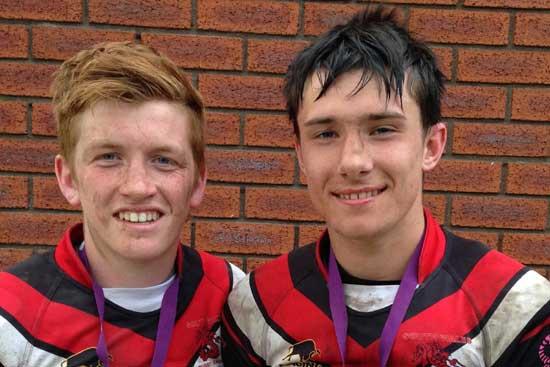 Two of South Wales Scorpions’ young first team squad members will gain some much needed experience this winter after agreeing to join French Elite 2 side La Réole XIII, until the end of their season.

Full-back Ben Jones from Bridgend and hooker Zak Williams from Monmouth, both aged 18, have only just joined the Scorpions’ senior side following a successful rise through the South Wales junior ranks where they started at under 15 level.

They are both Wales under 16 and under 18 internationals, both represented Wales in the 2014 Commonwealth Championships in Glasgow helping the Dragons to bronze, and both graduated from the Wales Rugby League AASE Academy late last year.

La Réole is based near Bordeaux and they are just entering the second phase of their 2014-15 season where they are in a mini league alongside Carpentras, Lyon-Villeurbanne and Réalmont. This level of rugby is similar to League 1 in the UK and the two Welsh youngsters will be available for selection for the six games until the regular season ends on March 22nd, a fortnight before the Scorpions’ Kingstone Press League 1 season starts, and any end of season play-offs.

The lads travel to France this Wednesday and will both be available for selection for La Réole’s away match at Lyon-Villeurbanne this Sunday. La Réole were promoted to Elite 2 as LN1 champions last year.

Scorpions’ coach Mike Grady said: “This is a fantastic opportunity for Ben and Zak to play competitive first team Rugby League for the next couple of months. I’ve played in France and the Rugby League there is very competitive at every level. They’ll have a tough time and they’ll come back better players for it which can only help the Scorpions and Rugby League in Wales. I wish them the very best.”

Jones said: “I’m really looking forward to be working in a different country and experiencing the Rugby League at a very competitive level. I know it will be tough but it will get me some good experience and hopefully make me a better player and push my career forward.

“It’s been quite an eventful 18 months, taking part in the AASE programme, winning bronze in a Commonwealth Games exhibition sport and playing for Wales at other levels. I’d like to thank all my coaches, people like Jon Ellis and Lee Cullen, who have helped me along the way. It will be hard for me leaving a lot of people but I know it’ll benefit me in the end. My dad would have been proud of me.”

Williams adds: “I and really cannot wait to get out there. Since I started my journey in Rugby League back in 2010 where I was scouted by Lee Cullen in Schools Rugby League Finals, I’ve achieved so much and sacrificed a lot too especially living away from home to be a part of the AASE programme staying with both Ben Jones and Daniel Maiden and their families, who I’d like to thank for taking me under their roofs so I could pursue a career in the sport I love.

“Having this opportunity to go and fly the flag for WRL along with my friend Ben, in a sport that we have both worked so hard in, is a dream come true. I would like to thank all in the WRL who have supported me over the years striving to give me every best opportunity, and those close to me, who have endured all those miles to come and support and watch me play. A special thank you to my parents for all they have done especially my mum for all those evenings taking me back and forth to training whilst my dad was away serving in the military.”