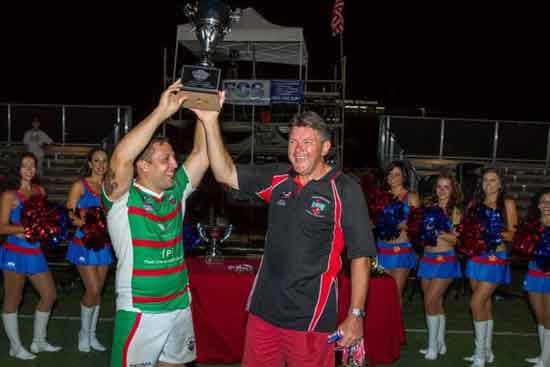 The first unified rugby league season in the United States, now under the auspices of the USARL, will comprise of fourteen teams split into three divisions over two conferences, North and South.

The competition, which includes three clubs from the former AMNRL, will see sides participate from Boston in the north to Daytona in the south.

USA Rugby League chairman, Peter Illfield, commenting on the new format noted, “Today is a significant one for rugby league in America.

On the heels of becoming a member of the Rugby League International Federation, the 2015 season will see a record number of clubs take the field, exposing even more players and fans to the game.”

To decide the overall national champions, the respective winners of the North-East and Mid-Atlantic divisions will play-off for the right to face the top southern conference team in the Grand Final.

Illfield confirmed, “The USARL board voted in 10 clubs from our 2014 season, with all agreeing to improve standards by recruiting participants for match officials and coach education training, youth development and multi-level grades of participation.

“The Baltimore Blues were unsuccessful with their bid and their survival depends on the viability of a proposed second-grade competition in the mid-Atlantic region.”
USARL format 2015:

One match-up expected to draw plenty of attention is the battle of New York City, with Brooklyn Kings taking on the New York Knights in what many expect to be the two teams to watch in the North-East division.

In the Mid-Atlantic, last year’s USARL champions Philadelphia Fight will face even stronger opposition in their quest to win three titles in a row with the addition of Bucks County and Wilmington Black Foxes.