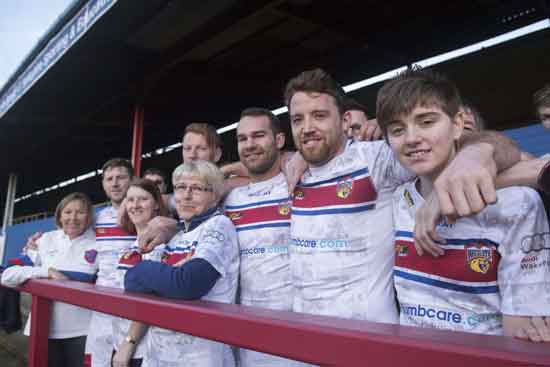 Titled ‘The Time Has Come’, the film focuses on players and fans from all 12 Super League clubs as they prepare for one of the most important years in the history of Rugby League.

Featuring exclusive behind the scenes footage of many of the sport’s biggest stars alongside genuine supporters, the video captures the enormous sense of excitement surrounding the 2015 season.

RFL Marketing Director Mark Foster said: “We are one of the few sports in the world that could produce a video like this – all people involved are genuine fans, players and club characters.

“Our supporters are the most important part of Super League, they play a big part in making Super League the amazing competition it is and match day such an unforgettable experience.

“Our players, fans and the fantastic characters at each club are the stars of the film. We want people to see our extraordinary athletes but also the emotional experience of being a fan and how strong the link between player and fan is.

“Working closely with the team at MOB Film, the video is part of a coordinated marketing and PR season launch campaign to build awareness of the start of an exciting new era for Rugby League.”

The full two-minute online version is available to view below. An edited 30-second version will be screened to millions of viewers across the Sky platform over the next two weeks.

The 2015 First Utility Super League season kicks off over the weekend of February 5-8 with six mouth-watering fixtures as follows: