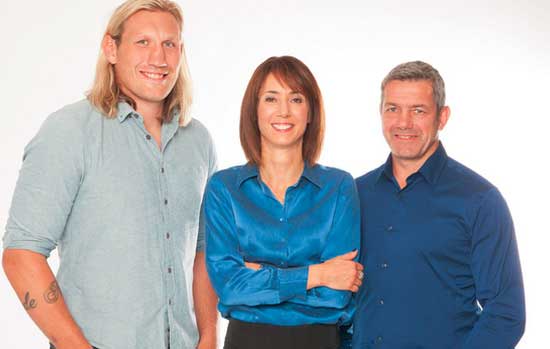 The BBC’s weekly rugby league programme The Super League Show returns to BBC One across the North for a seventeenth series on Monday 9 February. Every week for 30 weeks Tanya Arnold will present extensive highlights from all the games in this historic first season, as the sport enters a new era with a reworked Super League structure.

The Super League Show will be fronted again by Tanya Arnold, who will be joined by a host of big name guests including Jon Wilkin, Darryl Powell, Jamie Peacock, Eorl Crabtree and Brian Noble.

The Super League Show will run throughout the season giving extensive highlights of the weekend’s big matches. The programme is on air until September as Tanya and the team report on all the twists and turns of the First Utility Super League XX, as well as following the personalities and dramas of the game both on and off the pitch.

St Helens’ defence of their title at home to Catalans Dragons will feature in the first programme, plus Tanya and team will weigh up the chances of the top clubs in the forthcoming landmark season as a new format for the rugby league kicks off.

In the new look season, the 12 Super League clubs play each other twice home and away, during the regular season – plus one fixture in the so-called Magic Weekend. Then the 24 Super League and Championship clubs will split into three groups – the Super 8s – based on league positions. The top eight will continue as Super League, the middle eight will be the Qualifiers and the third eight play for the Championship Shield.

Made at the BBC’s Leeds based studios, home city of Leeds Rhinos, the Super League Show is produced by award winning PDI Media.

Tanya Arnold says: “The new rugby league format has caused a stir, and is bound to offer lots of drama throughout the year, as the leagues split in July into the Super 8s. We will be following everything closely, bringing viewers a round up of all the action in this fantastic sport, in what promises to be a pivotal and exciting year for rugby league.”

In addition to the Super League Show, BBC Sport will show highlights of both play-off semi-finals and the grand final on BBC Two & BBC Two HD. There will also be live coverage of seven Ladbrokes Challenge Cup matches on BBC One & BBC One HD and BBC Two & BBC Two HD, made up of two each over the sixth round, quarter finals and semi-finals and culminating in extensive coverage of the final on Saturday 29 August.

As well as the television offering – which sees rugby league on terrestrial television for 42 weeks of the year plus catch up options on the BBC iPlayer – Radio 5 live sports extra also offers live commentary throughout the season. 2015 will also see the BBC Sport website have an increased week-in, week-out improved online offering, with more video, features and analysis and all content available via the BBC Sport App.

BBC Local Radio will also offer comprehensive coverage of matches where there are Super League Teams.