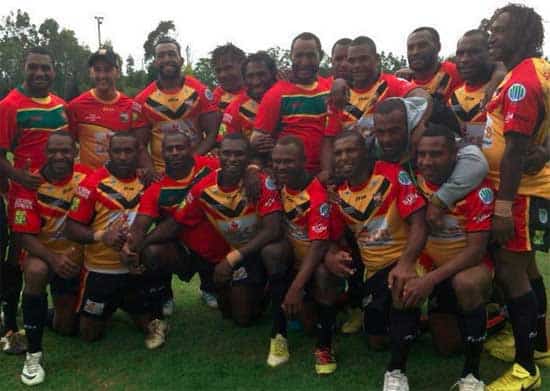 PNGRFL Chairman Sandis Tsaka has today announced his Chairman’s select squad for the Cabramatta 9’s tournament in Sydney on Saturday the 31st January 2015.

The attendance of the PNG side at the tournament is funded through the PNG Olympic Committees “Go for Gold” program and is a vital tournament leading up to this year Pacific Games said Tsaka;

“The PNGRFL has established a database of players identified through the various PNGRFL programs delivered in 2014 and the Digicel Cup. I want to point out that this is NOT a National side – it is a continuation of the development and identification program we have established for the Pacific Games. We want as wide a group as possible to have experience at a high level. This will ensure we have the best possible squad selected for the Pacific Games with the experience required to win the Gold for PNG. A lot of players that have been selected were part of the successful undefeated Commonwealth Championship Glasgow 9’s team. They deserve their selection and this tournament is a further step in their development. They get to step up and play against some quality teams in what is widely regarded as the best 9’s tournament in Australia outside of the Auckland NRL 9’s.

Tsaka said the emphasis was on youth in his selection and the chance to blood some new young talent to test the players;

“The average age of the squad is 20 years of age so it’s a very young team. While we certainly want them to compete well the tournament is more about finding out who can step up and perform at that level and continuing the development of these young talents. Philemon Kimisive who is part of the SP PNG Hunters Squad has been included to give him that added experience and at only 18 years of age, 6’3”, quick, strong and athletic he will be a welcome addition.”

Tsaka said the team will be based at Penrith Leagues Club, largely thanks to the strong relationship built between the Penrith Panthers NRL Club and Executive General Manager Phil Gould;

“The team will depart on Sunday the 25th January and will be based at Penrith Leagues Club for a week leading into the 9’s, where they will have access to the facilities and staff of the Panthers NRL team. Phil Gould has been fantastic in his assistance with the program and we have forged a very strong relationship with the Panthers. The players will benefit enormously from the experience and having access to an NRL setup. Stanton Albert who was a member of the Commonwealth Championship team in 2014 and who has recently joined the Panthers on a two-year contract has been allowed by the Panthers to take part in the Tournament. It’s a wonderful example of what can be achieved through a partnership with an NRL club and we thank the Panthers and Phil Gould for their assistance.”

Tsaka said the PNGRFL had hit the ground running this year;

“Shane and his team at the PNGRFL have been instrumental in getting this program together. Apart from the Tournament we also have our annual Development Officers Conference at NSI in Goroka this week, the AGM at the end of the month and the first round of our coach and referee accreditation courses in February. It’s a big year ahead and we are well advanced in our planning and delivery of our programs.”