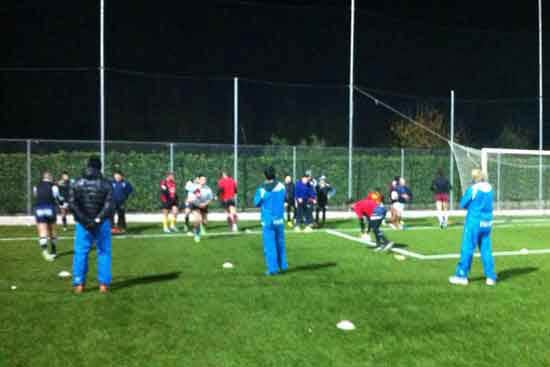 The Federazione Italiana Rugby Football League (FIRFL), the ‘unofficial rugby league body’ in Italy have announced early signs of expansion for their mid-year championship – the r-Evolution League (specifically, the Central Italian group). The first new city announced for the 2015 season is L’Aquila in the Abruzzo region, after another rugby league training session held was at a new FIRFL Sports Facility (centro sportivo “dei Rogazionisti”) in Grottaferrata, a sub-city in Rome on December 22 with 27 players present, but not only for some players from Lazio, but much wider in Umbria and Abruzzo.

Two federal technical officers in Sebastian Velazquez and Simone Martellucci were present, along with national team manager Riccardo Marini, where athletes had an effective classic training session: including a few hours work based on some tactical concepts, but especially focusing on defense and technical areas. Team Manager Marini said

“It was a very positive training meeting where we tested the level of development of these guys. The ages of the athletes consisted of both Senior and Junior and now we can we are very satisfied from what was seen at Grottaferrata. At the end of the training meeting a classic “third half” was held between those present, an occasion to wish each other greetings for the holidays.”

The training in the city was mostly due to the particular presence, a tasty novelty, of ten athletes from Gran Sasso, a club in L’Aquila (participating in the Italian semi-professional rugby union competition serie a) with which could open talks and very interesting plots at the federal level. Marini specifically states

“First of all I want to point out that at the training meeting the Gran Sasso coach, Pierpaolo Rotilio was present and we are happy as a Federation that the abruzzo club’s players have wanted to closely test rugby league (due to several players participating with CellaCella XIII Rugby Rieti in 2014). There is possibility, therefore, that in short L’Aquila also can have a team to participate in our Championship.”

Again because of this, the next national training meeting for the region (scheduled for January in Central Italy) could be held in the capital of Abruzzo.