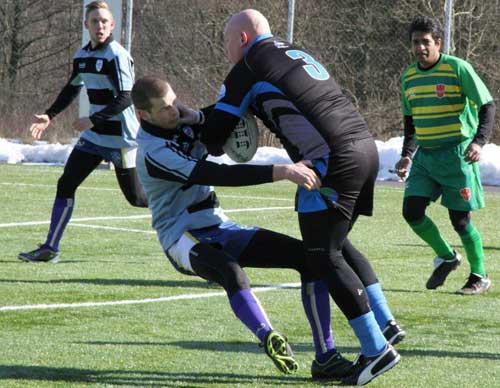 Major changes have been unveiled by Sweden Rugby League which has seen them elect a new chairman and board, sign a major sponsorship deal and announce the formation of two new clubs in Stockholm which will see the start of regular domestic competition.

The launch of the ‘Swedish Impact Prowear League’ marks a new era for the country according to incoming chairman Paul Briggs who takes over from founder Scott Edwards.

“We have a lot to be thankful to Scott for and we will be honouring him with a new trophy,” said Briggs after his organisation’s AGM in Jonkoping ratifying the changes.

“In a unique format, the ‘Scott Edwards Shield’ will be continually played for throughout the season,” Briggs added. “The holders must aim to defend it at their home games providing an additional challenge for visiting sides who will be intent on taking their spoils from them.”

Among those challenging will be newcomers Sodertalje Storm – led by Swedish captain Fabian Wikander and Stockholms Kungar – who will be coached by former St Helens and Wales star Anthony Sullivan, joining the already established Kungsbacka Broncos and Skane Crusaders, with plans to form more teams for 2016.

Kungar manager and SRL treasurer Adam Kirk commented, “It has been quite easy to recruit players in the capital and we are very lucky to have found an extremely enthusiastic club sponsor who believes in us and the sport here in Sweden.

“On top of that, having a former professional Anthony Sullivan, who has played for many years at the highest level, as the coach of our team will make us a force to be reckoned with”.

In addition, the ambitious SRL have formed a major partnership with ImpactProwear.com who have come on board as naming rights partner for the league and will provide a complete range of on-field and casual apparel for the Swedish national team and each club for the next three years.

Braceiller Productions have also partnered with the League to become the official photography and media provider.

Paul Briggs continued, “We have enlisted advisors to help us grow in a structured, professional manner.

“It is an exciting time for us and for emerging nations around the world with rugby league starting in more and more places.”

“We have plans to revamp the annual Scandinavian 9’s tournament over the coming years to make it a real showpiece for the sport and have developed a 10 year strategic plan to improve steadily.

“The ‘Swedish Impact Prowear League’ marks the dawn of a sport which we feel the people of Sweden will take to heart for years to come.

Sweden national coach Ashley Brown added, “We have put ourselves in a great position to becoming an affiliate member of the RLEF, it sets in motion the potential for Sweden to become a force in Europe”.