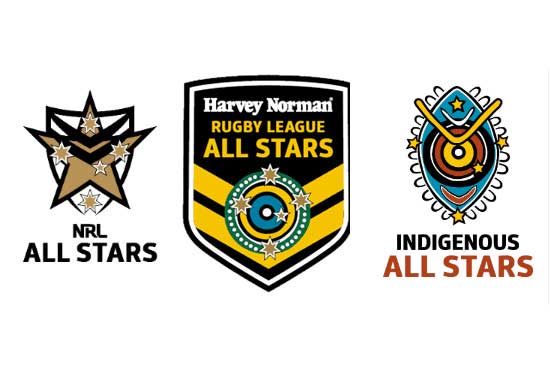 NRL All Stars Coach Wayne Bennett was joined by Michael Ennis (Sharks) in Brisbane today to name his squad for the fifth Harvey Norman Rugby League All Stars.

Bennett said he wanted to ensure his side featured a good mix of the game’s up-and-comers as well as the stalwarts.

“We have some young guys who proved themselves last season and have a fantastic career ahead of them, combined with those who have a strong representative background,” Bennett said.

“I look forward to our players being part of the whole week of All Stars activities and community events and I commend them for their ongoing commitment to the All Stars concept, which continues to make a real difference to the lives of many Australians.”

Moylan will make his All Stars debut at fullback, along with fellow newcomers Walker and Canberra centre Jarrod Croker.

Premiership-winning Foran and Pearce, who have been friends since school, will pair up in the halves, with Brooks adding a dynamic look to the interchange.

Cronulla’s new signing Ennis, who made his All Stars debut in 2012, said he was looking forward to his return into a Harvey Norman Rugby League All Stars camp.

“I really love the All Stars concept and it’s a massive honour to once again be selected to be a part of the week,” he said.

“The diversity and inclusion of this event is what makes it so special, not just for the players but the wider community and I’m glad that it’s back on the calendar.

“My children are now at the age where they can appreciate and understand what I am playing for, particularly in my representative matches and it’s really exciting that they will be there on match day.”

The Hon. Linda Burney, MP, Chair of the Australian Rugby League Indigenous Council, added: “This year’s Harvey Norman Rugby League All Stars will be seven years to the day since Kevin Rudd’s apology to Australia’s Indigenous people, which adds a real significance to the event in 2015.

“This is the most significant rugby league event on the calendar for the Indigenous and Torres Strait community but it will be even more special this year.”

The two finished as the most popular selections from a public vote of more than 15,000 fans, and were separated by just 33 votes when the polls closed.

Thurston and Inglis will join the likes of Justin Hodges, Sam Thaiday, Greg Bird and Ben Barba in the Indigenous All Stars squad, which will be coached by Laurie Daley. Thurston will join new Cronulla signing Barba in a dynamic halves pairing which will be hoping to help the squad retain the Arthur Beetson trophy following their 2013 win at Suncorp Stadium.

Joining Thurston and Inglis in the backs will be the experience of Justin Hodges (Broncos) in the centres, alongside Will Chambers (Storm). South Sydney’s premiership-winning winger Alex Johnston and Gold Coast Titan Josh Hoffman will make their All Stars debuts.

In the forwards, the Indigenous side will be led by Greg Bird and his Titans team mate Ryan James, with Broncos stalwart Sam Thaiday joined by youngster Tyrone Peachey (Panthers) in the second row, recent St George Illawarra signing George Rose at prop, and Ray Thompson (Cowboys) at hooker.

Daley commended fans on their enthusiasm in the selection process.

“The public have made it easy for me and I can’t wait to coach this squad,” Daley said. “It is a wonderful squad and there is some incredible talent all the way through it. They will play some exciting football and that is exactly what the All Stars concept is known for.

“I’m really looking forward to bringing this side together and coaching some of the
game’s best players and brightest talents.”

Having been part of Indigenous All Stars camps as a member of the coaching staff and as a player, Assistant Coach Wendell Sailor said he was proud to be a part of the concept again.

“There is no doubt the fans will be in for an entertaining game with the great mix of talented and exciting backs and powerful forwards in both teams, as well as the blend of experience and youth,” he said.

“What is so special about the Indigenous All Stars game is that it recognises the huge contribution that Aboriginal and Torres Strait Islander players make to Rugby League and is a celebration for the wider community.”

Coming into the side for the first time, Gold Coast Titans player Josh Hoffman spoke of his excitement surrounding his selection.

“To play alongside some of the game’s best Indigenous players is a true honour and I’m certainly excited by the prospect,” he said.

“I have heard so many great stories about the way the team comes together during the camp and interacts with the community.

“It should be a great game, a really entertaining spectacle and I can’t wait.”

The Hon. Linda Burney, MP, Chair of the Australian Rugby League Indigenous Council, added: “This year’s Harvey Norman Rugby League All Stars will be seven years to the day since Kevin Rudd’s apology to Australia’s Indigenous people, which adds a real significance to the event in 2015.

“This is the most significant rugby league event on the calendar for the Indigenous and Torres Strait community but it will be even more special this year.”

Tickets are available for the Harvey Norman Rugby League All Stars at ticketek.com.au/allstars