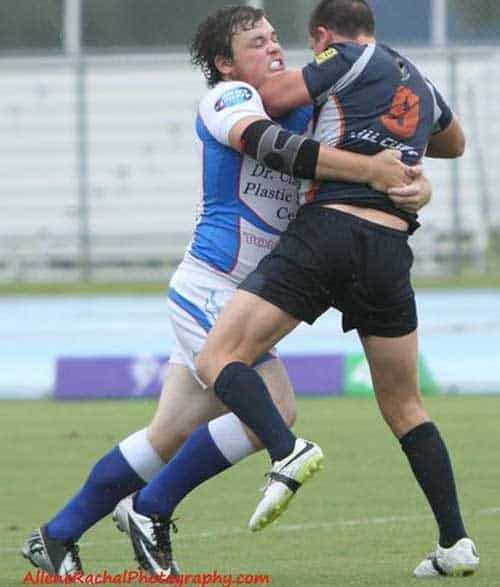 The youngest of the list of Axemen players to experience Rugby League in Australia is getting set to leave Jacksonville on January 6, to spend a season in the Sunshine State of Australia (Queensland), thanks to former NRL player Dane Campbell.

Mike Scott, who is only 19 years of age and a former Nease High School and Florida Atlantic University Football player, joined the Axemen at the start of 2014 after being noticed by Axemen veteran Matt Thornton. Mike had been working out in the personal training gym owned by Thornton, when he was encouraged to consider trying Rugby League, and although he knew little about the sport, his athletic ability allowed him to push into the top grade team for a number of games during the season. At 5’11” and about 230lbs (105kg) he proved to be a tough player to tackle even with his limited experience.

Mike Scott is shown in the photo above using his power to drive a Tampa Mayhem player back during a tackle. (Photo Cred: Allene Rachal)

Dane Campbell has been one of the biggest influences for the development of Rugby League on the international stage following his top-flight career. He was instrumental in developing Rugby League in Jamaica and the creation of the Jamaican Hurricanes team. He is also heavily involved with founding Vanuatu Rugby League. Following his NRL career Dane played, coached and was president for the Noosa Pirates on the Sunshine Coast (North of Brisbane) and is now involved with Sunshine Coast Falcons as the assistant coach for the colts (under 20’s) team.

Over the last 6 weeks Mike Scott has been preparing for the opportunity and sending testing results over to Dane. After initial results his focus has been on fitness rather than strength. Mike turned in single rep weights of; Bench Press – 405lb (180kg) / Squat – 505lb (230kg) / Front Squat – 385lb (175kg) / Deadlift- 585lb (265kg) and Push Press – 295lb (130kg). “With his background in weightlifting it is pretty clear Mike won’t have any issue with being strong enough, and his weights showed that,” said Spinner Howland who has been helping with the testing. “He did run almost 1900 meters in the 10 minute shuttle run but his beep test was below what is needed, so the focus has been on fitness and dynamic exercises until he heads out. We all know he is about to take a very big step up in the level of the game, but his constant willingness to learn and his humble approach all season is what allowed him to learn as much as he did with the Axemen. Yes he has a lot to learn to play at this level, but the combination of his serious approach, humility and intelligent understanding of contact sports, makes him one of the most coachable players we have had.” Mike will follow fellow Floridian Zac Shaul from Bradenton who played for the Pirates under Dane, and Axemen players Apple Pope, Casey Clark, Taylor Alley and Kevin Wathen who have all had time playing for various teams in Australia.

Axemen coach, Matt Keeley, had nothing but great things to say about the improvement and discipline that Mike showed all season, and was also involved in discussions to help find this opportunity.

Mike will start training with the Noosa Pirates for the 2015 season, but he will also be able to join the Falcons under 20’s team for practice sessions as well. This combination will allow him to play every week while being exposed to coaching and potential opportunity at a higher level. The Axemen know when Mike returns to the USA he will be someone they can look to for a leadership role within the team.

Drew Slover, Axemen General Manger, said that sending a player this young to Australia is a great step for the team and the sport in the USA. “Mike has a great sporting background and is one of the youngest players to have found Rugby League in the USA. For him to go to Australia at 19 and learn at this level and be surrounded by people like Dane Campbell is huge for us. He has at least 10 years of high-level athletics in front of him, and his approach to the game makes him the perfect player for this experience. He is exactly the type of player every team in the USA needs for on and off-field success.”
To follow the teams that Mike will be involved with:

**The Axemen will be holding a raffle during the January 11, USA Pioneers vs. Leeds Rhinos game to raise money to help Mike with his travel expenses to Australia.