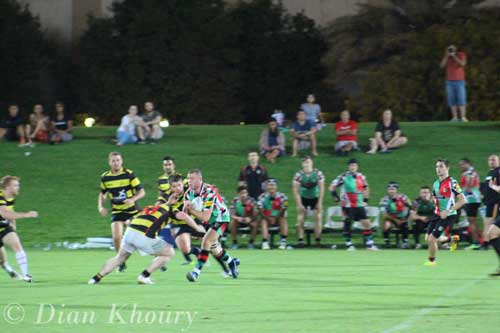 Plans are in place to increase the amount of domestic, representative and international rugby league played in and by the United Arab Emirates in 2015.

A new team, renewed State of Origin and preparations for the MEA Cup are scheduled according to UAERL President, Sol Mokdad.

“The UAERL Board is set up for a fruitful 2015 which will see unprecedented rugby league activity in the Emirates and Gulf region” he said.

On its completion, the annual Mike Ballard ‘Emirate of Origin’ returns for the third consecutive year, with the best from Dubai taking on the finest in Abu Dhabi. Game One will be held in Abu Dhabi on 15 May, 2015.

The UAE Falcons, the national side, will be taking on officially-ranked nations both home and away with fixtures planned against Lebanon and Serbia, together with internationals versus Pakistan and Thailand.

The Falcons have been strengthened by the appointment of George Yiasemides as head coach, who has put together a highly qualified team including a strength and conditioning and performance coach.

The Junior Falcons, coached by rugby league great Apollo Perelini, will be competing in the U18s MEA Cup which is earmarked to take place in Beirut in mid-February.